Violence erupts in Haiti as delay in votes counting continues 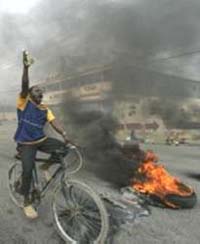 Violence erupts in Haiti as delay in votes counting continues

Brazil, the leading nation of the UN peacekeeping mission in Haiti, asked for an urgent meeting to discuss the situation in the Caribbean nation, as gunfire erupted Monday during protests over election results. Official sources confirmed that at least one supporter of leading presidential candidate Rene Preval was killed in a confusing episode that involved UN troops.

Witnesses said UN peacekeepers opened fire on the crowd, but a UN spokesman denied that. Preval’s supporters filled the streets on Monday to demand a quick vote counting, which was delayed last week after early results gave Preval, a former president and one-time protégé of ousted president Jean-Bertrand Aristide, a strong lead. Since then, Preval’s vote fell from 61 percent to less than the 50 percent needed to win outright and avoid a runoff.

David Wimhurst, spokesman for the UN mission – known by its French acronym MINUSTAH, denied in a telephone interview that peacekeepers opened fire. “We fired two warning shots into the air and we didn't injure anyone. Some time later, shots were fired by unknown persons in the same area,” he said. As for the witnesses' account that peacekeepers shot protesters, he said: “It's absolutely false.”

South African Nobel Peace Prize laureate Desmond Tutu, who had appealed for calm at church services Sunday, was seen on a balcony surveying the crowd as helicopters landed on the roof to evacuate people after the shooting.

Preval’s supporters and some media reports warned on a move to block the rise to power of the popular leader that was once a closer collaborator of the US-topple president Jean Bertrand Aristide, now in exile in South Africa.

With some 90 per cent of the vote counted, Mr. Préval was leading with 48.7 per cent of the vote, Haiti's electoral council said on its Web site. His nearest opponent was Leslie Manigat, another former president, who had 11.8 per cent. Of the 2.2 million ballots cast, about 125,000 ballots have been declared invalid because of irregularities, raising suspicion among Preval supporters that polling officials are trying to steal the election.