At least four die at packed polling stations in Haiti

Voters lined for hours to participate in the first elections since a US-backed coup ousted President Jean Bertrand Aristide in February 2004. 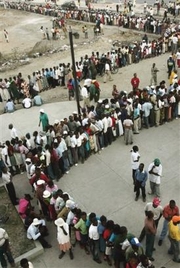 At least four die at packed polling stations in Haiti

Four killed and several injured is the aftermath of Tuesday’s chaotic Haitiian presidential vote, the first one since a US-backed coup ousted constitutional leader Jean Bertrand Arisitide in February 2004. Under the protection of the poorly organized UN peacekeepers, millions of Haitians went to the polls early in the morning to line – sometimes for miles - in their attempt to participate in the 33-candidate race.

Rene Preval, a 63-year-old former president backed by many poor Haitians, is the front-runner, according to pre-election polls. In an interview with the foreign media in Port-Au-Prince, he said "people are investing everything in this election." Also a new Congress, closed in 2000, is to be elected in Tuesday vote.

The turnout of the vote exceeded the most optimistic expectations and overwhelmed local and international electoral officials stationed in the main cities of this impoverished Caribbean nation. To allow masses of Haitians to vote, polls were closed nearly four hours later than scheduled, as later confirmed Stephane Lacroix, a spokesman for Haiti's elections commission.

"The people have voted massively," said Juan Gabriel Valdes, a U.N. special envoy. Government officials sought to maintain calm, assuring Haitians that everyone would have a chance to vote. By mid-afternoon, the process appeared more orderly. 10,000 U.N. troops lead by Brazilian peacemakers deployed in force to calm crowds.

However, the most dramatic episodes ocurred during the morning. In Port-Au Prince, Haiti’s capital, two elderly died during a stampede of angry voters at the gates of a polling station in the Petion-Ville area of the city. Later, a policemen was killed by another angry crowd after shooting a voter who was arguing with another in one of the kilometric lines that filled the city.

Preval — who has the backing of many supporters of Aristide — said if he wins, Haitians must recognize their country is in dire straits and should not set their expectations too high."We will not be able to do everything right away," he said. "But we are determined to do our best and raise the standard of living for the people of Haiti."

After the coup against Aristide US and French troops were deployed in the country to preserve the population from the revenge of anti-Aristide gangs connected with drug-smugglers and arm-traffickers. But they were soon replaced by a UN peacekeeping mission formed by Latin American armies, including personell from Argentina, Brazil and Chile.

The day of the election has been postponed many times until February 7 was finally agreed between local political parties and the UN mission. The campaign lacked of rallies and public exposure of the candidates due to the violent atmosphere in the main cities of the country.