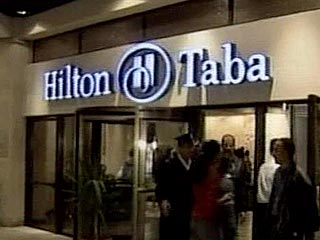 The largest number of victims was registered at Hilton-Taba hotel. The Egyptian Foreign Ministry confirmed that 12 people were killed and 135 wounded. Israeli media, however, report that the blasts killed 44 people and injured about 200, including Russian citizens. A group of Russian consulate officials left for Taba from Cairo.

The blast wave destroyed the reception desk with passports at Hilton Hotel. A senior doctor from Taba said that about 12 Russian tourists had been hospitalized as a result of the attack.

Over 70 injured people had been taken to Israel from Taba. According to the request from the Egyptian government, Israel sent rescue helicopters to Sinai.

See more photos of the terrorist attack here. Click on the picture to view the next one.

The Russian embassy in Cairo is currently investigating the information about the number of Russian citizens among the killed and the wounded, an official spokesman for the Russian Foreign Affairs Ministry, Alexander Yakovenko said. “We perceived the information about the terrorist attacks in Egypt with deep regret,” Yakovenko stated. The official added that the Russian embassy in Cairo contacted the Egyptian authorities to find out the details of the tragedy.

Egyptian President Hosni Mubarak and Israeli Prime Minister Ariel Sharon had a telephone conversation, in which they agreed to toughen security measures in the area of the border between Egypt and Israel. Egyptian security forces have already arrested several suspects of the terrorist attacks in the resort area, Arabian television Al-Jazeera reported with reference to spokespeople for Egyptian military officials.

Car bombs could be used for two of the four blasts, which rocked resorts in Egypt's Sinai overnight, Southern Sinai Governor Maj. Gen. Mustafa Afifi told an Egyptian television channel. Former mayor of the Israeli town of Eilat, which borders on Egypt's Taba, said in an interview with the BBC that terrorists organized the blast at Hilton-Taba hotel. According to the mayor, a truck approached the hotel, several people jumped out of it, rushed to the hotel and threw several bombs in it.

International terrorist organization Jemma Islamia claimed responsibility for the terrorist attack at Hilton Hotel in the Egyptian town of Taba. The group was responsible for the terrorist act on Bali on 12 October, 2002, when over 200 people were killed from 21 countries of the world. Jemma Islamia also claimed responsibility for the explosion at Mariott Hotel in Jakarta on 5 August, 2003, when 17 were killed and about 150 injured.

Palestine's Hamas announced that it was not implicated in the attack in Egypt's Taba, Israeli media report. Observers say that the explosions rocked Sinai against the background of the Israeli-led military operation in Gaza's north.