Passengers refuse to fly with two women in black on board 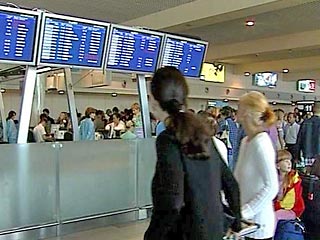 Incidents when Russian passengers refuse to fly due to suspicious-looking females of Middle Eastern descent are becoming a norm these days.

On September 1, the day of the Beslan tragedy, passengers of a Moscow-bound flight from Sharm el Sheih (Egypt) refused to fly with two Muslim women in traditional clothes onboard. This time, another flight from Moscow to Khurgada has been delayed.

“Two Egyptian women were set to fly aboard a TU-154 airplane of “KrasAir” departing for Khurgada,” stated RIA “Novosti’s” spokesman.

A group of five students from Dagestan were the last ones to board the aircraft. Among them were two Egyptian women dressed in black.

“Considering the recent events, security services searched them thoroughly. Their documents were fine; nothing was wrong with the luggage either. However, due to such time-consuming security check, they were the last ones to board the plane. This in turn caused major uproar among the passengers. People demanded them to be taken off the flight,” added he.

“A young man accompanied by a woman and two children was the last one to step aboard due to a long security check. They were on their way to Egypt, where they’ve been living for five years. As soon as the rest of the passengers saw them aboard, people simply refused to fly – perhaps, they were fearful of a possible terrorist act,” noted the airline company’s spokesman.

In the course of the following two hours, airport and airline spokespeople were trying to persuade the passengers to fly along with the Egyptians. People however remained steadfast.

All the passengers were then escorted back to the airport where each one of them had to undergo additional security check. The two Egyptian women have been examined publicly.

There were 120 people aboard the Tu-154 airplane. As a result of this little incident, the flight Moscow-Khurgada had eventually departed for Egypt with a four-and-a-half-hour delay.

Similar incident took place in Egypt on 1 September, 2004. Passengers along with crew members of a Moscow-bound airplane (KrasAir) from Sharm el Sheih refused to continue the flight after Egyptian personnel had allowed 2 Middle Eastern women to board the plane.

According to the crew, both of the females behaved rather suspiciously: they locked themselves up in the lavatory right after boarding. In the end, due to the crew’s and the passenger’s protest, they were asked to leave the plane.