Will USA protect you from us? 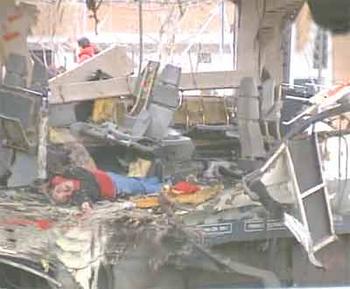 The blasts in Spain caused hundreds of deaths and were called the bloodiest terrorist attack in the history of Spain and Europe.
Not all the dead have been identified, but the organizers of this bloodshed have already been named by politicians and reporters. Bask group “ETA” has been accused of making the explosions. The UN Security Council has supported the accusations, while Bask separatists are denying the allegations.

There is nothing unusual that ETA has been accused of organizing the terrorist attacks. This separatist group has been fighting for independence of Bask country for a long time and uses terrorist methods in its activity. However, the scale and methods of the explosions in Madrid are different from ETA practice. Until recently the Bask separatists warned the authorities about the future terrorist attacks, and sometimes even reported where the blasts will take place. This allowed the police to minimize the number of victims and the damage from the blast.

In addition, ETA has been weakened by the arrests of its activists in France and Spain in 2003.

Another version that Al-Qaeda or some its accomplices organized the explosions, is more trustworthy. Terrorists from radical Islamic organizations (such as Al-Qaeda) always conduct their attacks in public places to produce maximum of damage.

The blasts in Madrid are compared with the 9/11 attacks in New York, but they are more similar to the explosions in Moscow Metro or on electric train in Russian town Essentuki. They have common targets and timing for the attacks (morning when people go to work).

Al-Qaeda has threatened Spain with terrorist attacks many times because of Spain’s support for the US military operation in Iraq. Also, Spain has a big community of natives from the Arabic countries of Northern Africa.

On March 12 information appeared that Arabic newspaper in London “al-Quds al-Arabi” received a letter from “Brigade of Abu Hafs al-Masri” group calling itself a division of Al-Qaeda. Here are the extracts from the letter:

”We have succeeded in hitting the heart of European Crusaders by attacking one of their main bases. This is a part of our revenge to Spain – the member of the Crusade and the ally for the US in its war against Islam”.

The authors of the letter called the terrorist acts in Spain “Operation “Deadly Trains”. They are calling Spanish Prime Minister Hose Maria Asnar, “Asnar, where is the USA? Who will protect you from us; Britain, Japan, Italy or somebody else?”

Then, “We are not sorry about the deaths of so-called “civilians”. If they are allowed to kill our children, women, old and young people in Afghanistan, Iraq, Palestine and Kashmir, why can’t we kill them?

We want to tell good news to Moslems of the world. The blow to the USA called “Winds of Black Death” is 90 percent ready, and the will of Allah will be fulfilled soon”.

Experts have to confirm the authenticity of the letter. Although the al-Quds al-Arabi newspaper editor considers the letter authenticable because it is similar to previous Al-Qaeda letters sent to this paper.

There is one more version of the terrorist attack – it could be organized by ETA members (they did not report the attack preparations to their leaders) in cooperation with Al-Qaeda.

If bin Laden’s involvement in the terrorist attacks in Madrid is confirmed, the successes of the anti-terrorist coalition may be called over-exaggerated.