Child Rises from the Dead After Aqua Park Tragedy 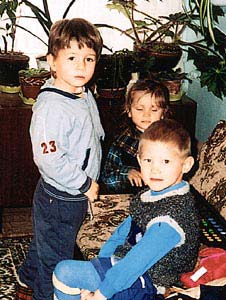 Saigid Magomedov lives in the Dagestan city of Makhachkala together with his parents. A week ago, his mother Zaira took the boy to Moscow for medical treatment. The boy with defective hearing was given a hearing aid and learnt to say "father" and some other words. Saigid loves swimming very much, so his mother let the boy go to the popular aqua park together with his uncle Mizam. She wanted the son to enjoy swimming.

The father of the boy, Esenbulat gave an interview to the Komsomolskaya Pravda newspaper when he came to the Russian capital a couple of days after the tragedy in the Moscow aqua park. "When I called my wife Saturday evening I was unhappy that the boy went to the aqua park for swimming. I disliked the idea of swimming in winter!"

When a beam collapsed the boy's uncle was pressed with a plate; however the boy managed to jump aside and was wounded with glass splinters and stones. Live savers set the man free and Mizam pointed to the plate under which the boy was pressed. Dogs found the boy immediately, but Saigid was not breathing, he neither spoke nor moved. The man felt despaired for the failure to keep the nephew's life.

Saigid was taken to a morgue. Doctors in the morgue were at first shocked when they saw the four-year dead boy move. They decided it was an illusion produced with a hard sleepless night. Suddenly, Saigid opened his eyes, moved his head and made attempts to stand up.

The doctors were surprised and shocked that the boy revived. And the boy was immediately taken to a reanimation ward of a hospital.
Esenbulat Magomedov said he called to Moscow immediately as he learnt about the tragedy. The man still believed his son was alive. He learnt that Mizam was in a hospital, but nobody knew where his 4-year-old son was. The alarmed father roused all his friends in the middle of the night. Forty people started searching for the boy about Moscow, however Saigid could not be found in hospitals and morgues. Finally, the mother learnt the boy had been taken to hospital #20. The woman said that as soon as the boy came to himself he said he would never go swimming.

Now Saigid's condition is stable. The other day, the newspaper staff called the hospital to learn how the boy felt.  Head of the first aid department for children's surgery and traumatology in the Pediatrics Research Institute Leonid Roshal said the boy felt better. "Saigid was taken to the hospital almost unconscious, with concussion of brain and felt rather bad. We could not talk to the boy and find out his name as Saigid lost his hearing aid during the tragedy. So, the child lost his connection with the world. Now his mother constantly stays together with the son. The child got a new hearing aid and we hope he will recover soon."

In the photo: Saigid (standing) now has two birthdays