Rescuers have recovered the bodies of all victims of the fire on board the Sukhoi Superjet 100 aircraft, which caught fire during an emergency landing at Moscow's Sheremetyevo Airport on May 5. 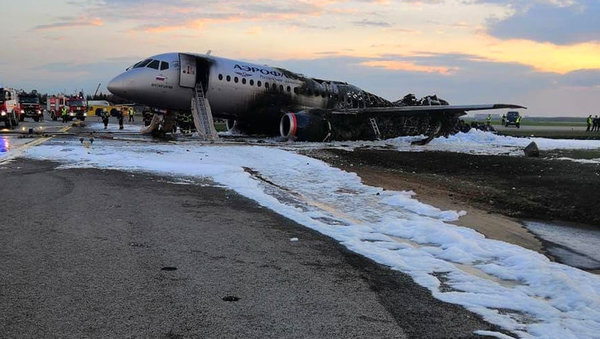 "At the moment, the bodies of 41 victims have been recovered. Most of them have been delivered to morgues for forensic examination and identification procedures," officials said.

Two black boxes (flight recorders) of the aircraft have been recovered as well.

Denis Evdokimov, the pilot of the plane, said that he was forced to turn the aircraft back to Sheremetyevo airport after a lightning struck the aircraft and caused the radio connection and avionic equipment to fail.

At the time of landing, the aircraft lost radio communication with the ground, but it was possible to restore it through an emergency radio channel. Flight control officers assisted the pilot in setting the course for the landing strip.

The fire on board the passenger aircraft started after the aircraft hit the runway. The plane had full fuel tanks as it was landing - it was impossible to conduct a manoeuvre to discharge fuel because of the lost radio communication. This led the airliner to perform hard landing: the aircraft hit the ground four times causing one of the gear legs to break. Fragments of the gear leg could break through the fuel tank and the engine thus causing the fire to start.

It was also reported that the people in the rear section of the plane started grabbing their bags and suitcases from overhead bins and thus blocked the isle for their own evacuation. Other passengers left the burning aircraft in 55 seconds while the established standard for this procedure envisages 90 seconds.

The flame has destroyed most of the cabin of the aircraft, its tail part, melted the inner lining and burned passenger seats.

Authorities of the Murmansk region declared three days of mourning in connection with the tragedy at Moscow's Sheremetyevo Airport. All entertaining events will be canceled, flags will fly at half-mast to honour the victims.

The tragedy has started numerous discussions on the Internet about the need for the Russian authorities to ban further operation of Sukhoi Superjet 100 aircraft at least temporarily. However, many believe that this will not happen as the plane has cost Russia millions and millions of budget funds.

According to Fontanka.ru website, the Sukhoi Superjet 100 aircraft with registration number RA-89098 had had an incident in its flight history.

On February 7, 2018, the same aircraft (Fight AFL1231) was flying from Murmansk to Moscow. When descending to land at Sheremetyevo airport, the pilots reported a failure in air brakes. There were 82 passengers and 6 crew members on board. The pilots had to take a waiting area at an altitude of about 3,300 meters. The crew carried out necessary procedures and landed the plane without activating air brakes 45 minutes after the malfunction report.

Aeroflot's Sukhoi Superjet aircraft (SSJ-100) bound to Murmansk made an emergency landing on May 5, 2019, at Moscow's Sheremetyevo Airport. The liner caught fire during landing. The tragedy has claimed the lives of 41 people. A total of 78 people were aboard the aircraft: 73 passengers and five crew members.