The list of most probable causes of Saratov Airlines An-148 plane crash in the Moscow region includes ignition in the engine, speed sensor malfunction, possible icing, and piloting error. The version of the terrorist attack has not been excluded yet. 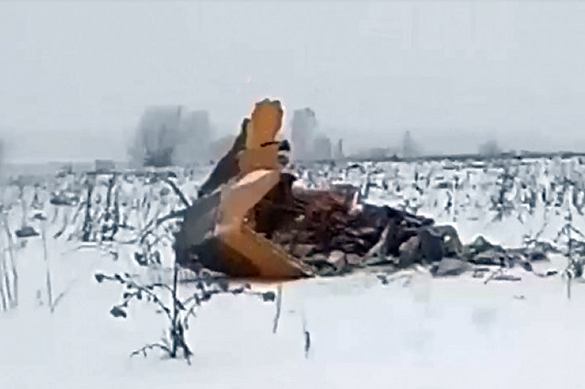 Originally, it was believed that the airplane crashed as a result of refuelling with poor-quality fuel. However, it was later said that the same fuel was used for tens of other aircraft the same day and none of them reported any problems whatsoever.

In addition, EMERCOM employees have not found the wreckage of another aircraft on the site of the tragedy, although it was reported soon after the crash that the An-148 could collide with a postal helicopter. Specialists said that the An-148 was equipped with the TCAS collision avoidance system, which means that the crew would have warned flight control officers of the approaching danger. It was noted that the crashed aircraft was not old - it was made less than eight years ago.

One of the priority versions is the instantaneous destruction of the engine in midair. In this case, engine blades may destroy the fuselage in seconds. The footage from the site of the tragedy, where  rescuers found the destroyed An-148 engine, serve as an indirect confirmation of this version.

Aviation experts also believe that one should not exclude the version of the icing of the aircraft during the flight. Law enforcers established that all necessary preflight measures had been conducted, but the commander refused to carry out the anti-icing work due to the favourable weather forecast. Yet, the weather was unstable that day and could make unexpected adjustments.

Finally, specialists say that the version of the malfunctioned speed indicator of the aircraft may also be one of the causes of the crash. This particular technical malfunction led to the crash of another An-148 in 2011, when a crew of six was killed. Being guided by understated speed readings, the pilot was increasing the speed of the aircraft until its engines caught fire causing the aircraft to fall apart in the air.

Flight 6W 703 Moscow-Orsk was scheduled to depart from Domodedovo Airport at 14:00, but the permission for take off was delayed for 24 minutes. The flight lasted only for a few minutes, with the crew showing no concerns at all. The audio recording of the pilot's conversation with flight dispatchers did not reveal any problems with the aircraft. At some point, the plane simply stopped responding to air traffic controllers' queries.

Radars recorded strange behaviour of the aircraft moments before the crash. Having gained altitude of about 1,800 meters and a speed of about 600 km/h, the airliner abruptly "dove" down to 1,500 meters, then regained the same altitude and crashed.

On board the An-148, there were six crew members and 65 passengers, including three minors. No one had chances to survive due to the impact with the ground. Eyewitnesses said that the plane left a hole about 2 meters deep and 17 meters in diameter.