Former State Duma deputy Denis Voronenkov, who fled to Ukraine, was killed in the center of Kiev today, March 23. The official was killed near Premier Palace Hotel at around noon. 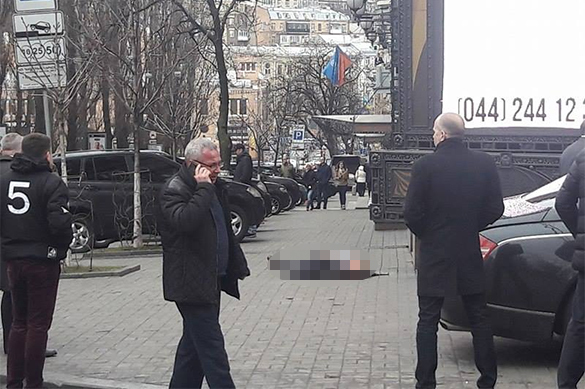 Voronenkov and his bodyguard were leaving the hotel when an unidentified individual opened fire at them. Denis Voronenkov was killed on the spot, his bodyguard was injured. The bodyguard managed to shoot back at the attacker. Both the bodyguard and the supposed attacker were hospitalized. One of them remains in intensive care in critical condition.

The chief of the Kiev police said that investigators, "taking into account the identity of the victim," believe that it was a contract killing.

It also became known that President of Ukraine Petro Poroshenko urgently summoned the head of the Security Service of Ukraine Vasily Hrytsak to his office after the murder of Voronenkov,.

The killing in Kiev has generated numerous discussions in social media. "He escaped from Russia to Ukraine by saying that there was authoritarianism in Russia and democracy in Ukraine and got a a bullet in the head, like in the democratic 1990s," a person wrote.

"This gives Kiev a trump card to shout about Russian special services. I would not be surprised that it was a "hello" for Voronenkov. What do you want - this is what they do to traitors, but it appears to be an internal affair of Ukraine. Voronenkov had said everything that he could say anyway," another user wrote.

Russia's Investigative Committee had previously put Voronenkov on the federal wanted list on charges of fraud. Reportedly, he received Ukrainian citizenship and left to Ukraine, where he made a number of harsh statements about Russia. Denis Voronenkov moved to Ukraine with his wife Maria Maksakova, also an ex-deputy.

Earlier, blogger Alexander Zhilin  predicted a scenario of events that could happen to Voronenkov and his wife Maksakova:

"After the couple moved to Ukraine, Ukrainian and Anglo-Saxon media started promoting them. At first those two were made recognizable, and then the media started turning them into irreconcilable fighters against Putin and his bloody regime. The right image of the sacred victim was created. As soon as they accomplish their goal, specially trained SBU people (Ukraine's Security Service) will remove them. The grand finale will be a traditional one: the Kremlin, the monstrous Putin, the FSB and other nonsense that will eclipse everything against the backdrop of emotional videos of the victims."

Anton Geraschenko, an advisor to the head of the Ministry for Internal Affairs of Ukraine, commented about the murder of Denis Voronenkov:

"This is a contractual political assassination, the goal of which is to intimidate all those Russian deputies and officials who will try to escape from Russia to the West or to Ukraine ... I bring my sincere condolences to his wife, relatives and friends," the official said.