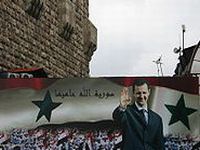 The president stressed that the Tel Aviv regime is conducting offensives against his country in order to prevent the progress of the Syrian armed forces and strengthen the extremist armed groups seeking to overthrow the government in Damascus.

"They provide support for terrorist groups, it is obvious. Every time we made progress in a given area, Israeli attacks are carried out to influence the effectiveness of the Syrian army," he complained.

Al-Assad has emphasized that Syrian troops have succeeded in all operations that they have chosen to pursue in the Arab country.

He also recalled that all wars are harmful because they cause loss and destruction, however, he has indicated that during the armed conflict in Syria, it has strengthened both the support of the Syrian people to their government and their rejection of terrorism.

Several documents and facts have shown the support of the Israeli regime to terrorists operating in Syria against the government in Damascus since the start of the crisis in the Arab country that so far has claimed the lives of over 200,000 people.

On January 18, an Israeli military helicopter fired two missiles at a convoy of the Islamic Resistance Movement in Lebanon (Hezbollah) in the region of Quneitra, on Syrian Golan Heights, and consequently six members of the Lebanese movement died along with an Iranian senior commander.

Syrian Information Minister Omran al-Zoubi, said that this attack demonstrated the cooperation of the Israeli regime to terrorist organizations like Al-Nusra Front, affiliated to Al-Qaeda, fighting the government in Damascus.

On September 23, 2014, the Israeli army also shot down a fighter jet on the Syrian Golan Heights, an attack that was described as hostile and provocative by the government in Damascus.

Moreover, the Israeli daily Haaretz revealed last month that several reports of international observers in the Golan Heights, presented to the members of the Security Council of the United Nations (UNSC), confirm regular contacts between officers and men the Israeli army and the armed opposition figures in Syria.