In Donetsk, a shell hit a public transport stop, killing 13 people and wounding dozens, the Donetsk News Agency reports with reference to the authorities of the self-proclaimed People's Republic of Donetsk. 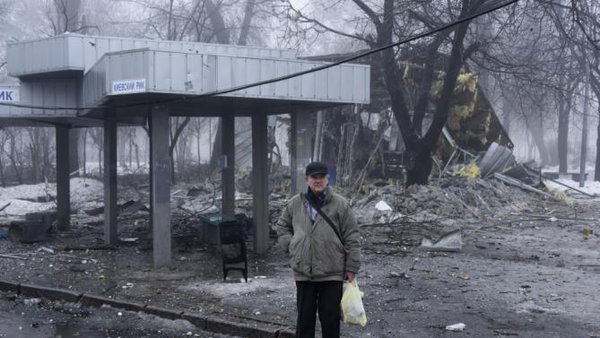 According to Russia 24 TV channel, there were nine people killed - mostly elderly men and women. More than 20 people were injured and rushed to hospitals. Reportedly, there are children among the injured. The condition of some of the wounded is said to be serious.

The firing was conducted from a 82-millimeter mortar. Presumably, the attack was conducted by members of a subversive group. The 4-storeyed building located near the bus stop received significant damage as a result of the attack. The shell also damaged a trolleybus and a car nearby, the driver of which was killed.

The incident occurred at around 9 a.m. local time. The shell exploded near the bus stop called "Gormash" in the Leninsky district of the city of Donetsk.

According to preliminary reports, the shelling was conducted from a minibus, with the use of mortars, reports TASS. "There were about five shots, similar to mortar shots," a local resident, who was near the scene at the time of the shelling, told the Donetsk News Agency.

The photos of the shelled trolleybus with bodies of the victims, mostly women, have surfaced on the Internet. At the moment of the attack, there were a lot of people at the bus stop; they were in a rush for work.

Kiev does everything to frustrate peace process

Spokespeople for the administration of the People's Republic of Donetsk accused Ukrainian military forces of shelling the public transport stop. "Any bombardment of peaceful settlements, deaths of civilians complicates the negotiation process. After the "Norman format" we must move forward in peace talks, but Kiev is doing everything to frustrate the negotiation process," Denis Pushilin, a representative of the People's Republic of Donetsk told Interfax.

Pushilin accused Kiev of conducting the policy of terror in the Donbass. "After the events that occurred in Volnovakha (when 13 were killed in the shelling of a passenger bus - ed.), we again see people dying. In fact, the Ukrainian military act as terrorists," said Pushilin.

Representatives of the Donetsk City Administration say that the situation in the city remains tense. The sounds of volleys and explosions of shells can be heard in the city area frequently.

Spokesman for the Defense Ministry of the People's Republic of Donetsk, Eduard Basurin, said that as a result of attacks conducted by Ukrainian security forces, four civilians were killed and 34 were injured in Donetsk in the past 24 hours. He specified that in one day, the Ukrainian military fired the territory of the breakaway republic 43 times, including 19 times at night.