Ali Akbar Velayati, former Minister of Foreign Affairs of the Islamic Republic of Iran, claims that it was Iranian support that stopped Islamic State from seizing the Iraqi cities of Erbil and Baghdad; meanwhile Syria has denounded support from Saudia Arabia for terrorist entities. 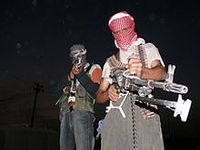 Tehran, (Prensa Latina) The fundamentalist group Islamic State (IS) is "on the verge of defeat," the former foreign minister of Iran, Ali Akbar Velayati stated on Monday (05) the Iran. Velayati is now director of the Center for Strategic Studies of the Discernment Council of State Interest.

Speaking to the Tehran Times newspaper, Velayati assured that recent blows suffered in Iraq against the extremists weakened their positions and he states that the end of their actions approaches thanks primarily to government efforts and the people of Iraq with the support of Iran.

Velayati, who served as  Iran's Minister of Foreign Affairs from 1981until 1997, stressed the importance of unity of ethnic and religious groups of Iraqis to defeat the IS, and indicated that this struggle has strengthened national solidarity among Shiites, Sunnis and Kurds.

The military support from Tehran contributed to "break the backbone" of IS in Iraq preventing their advance towards the capital, Baghdad, and the city of Erbil, two of the goals more important for the fundamentalists, according to declarations made recently by Ali Shamjani, Secretary of the Board Iran's security.

Syria denounces support of Saudi Arabia in favor of terrorism

Syrian Deputy Foreign Minister Faisal al Mekdad accused on Sunday (4), Saudi Arabia as being one of the main entities responsible for the massacres and the war unleashed against his country, using the armed insurrection of terrorists as a tool.

"The Saudi killing machine continues to shed the blood of Syrians without any mercy or religious scruples", denounced the Deputy Foreign Minister in an article published by the newspaper Al Binaa.

According to the deputy minister, the responsibility for the crimes committed against the Syrian people falls on the shoulders of the Saudi authorities.

He also condemned the support of Turkey, USA, France and UK to extremist groups like the Muslim Brotherhood, Al Qaeda and the Islamic State.

"History will not forgive the financing of the Saudi royal family and murderers in Syria," he warned.

Despite the billions of dollars that Saudi Arabia pays for radical organizations to fight for our country, we will never surrender nor will they put us on our knees, he said.

More than 200,000 people have died since the conflict began in Syria in March 2011, and millions more were forced to flee their homes.