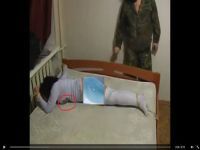 The video is about fascist who severely beat a girl, but the mainstream media ready to use it against the army of Novorossiya. This video was uploaded in Youtube as video about punishment of girl for walking to pub in Lugansk republic. It is begin of media campaign against Novorossiya. But it is the Ukrainian fascists in occupied cities that are kidnapping girls and forcing them into sex slavery, issuing severe beatings...
Suddenly, Youtube deleted this video, but video was saved and analyzed.

This video is very awful and for me was very hard to watch and analyse. I found that this video had marks of montage. At the 0.25, 0.58, 1.12, 1.46, 1.58, 2.05 video was sliced. Positions of the girl's body and her head became re-positioned at these seconds in the video. This happened when, from a longer video, somebody had cut out pieces and then re-connected them.

The punishment went on far longer than what is seen in this video. The girl began to scream after each hit from the first seconds, she moved her body in order to avoid the blows. The first 25 seconds of the video was the real beginning of the execution. The girl was trying and did not scream loudly. She endured pain without showing weakness to the enemy.

So the Fascists beat her more severely between the 24 and 25 seconds mark where the video was spliced; when what amount of time really passed is unknown. From 25 seconds the girl is screaming and crying loudly, She can't endure the pain any more. But the fascists continue to beat her severely. Between 57 and 58 seconds of the video where it was sliced, there really passed a big amount of time. The Fascist are beating her with the same cruelty but the girl doesn't move and doesn't scream loudly. Maybe she is too tired to scream and her body, beaten in places, doesn't feel the pain any longer. Perhaps she has partially lost consciousness. Her body reacts to hits, but she doesn't scream.

Then the fascists brought her to fuller consciousness, to continue the torture. Video was spliced between 1.11 and 1.12. This is evident from the slice point at 1.12 seconds where she started screaming again. Between 1.45 and 1.46 seconds of video was sliced. At the 1.46 mark of the video she is without consciousness again. After an unknown term of beating video was spliced out.. She didn't react to the hits, it is evident within 10 seconds of video.

The Fascists once again brought her to consciousness in order to continue the torture, It begin after another slice of video, from 1.58 . The victim became hoarse from screaming, as the fascists tortured her during a few hours or more. Between the 2.04 and 2.05 seconds splice, there really came a longer term, as the position of her head had changed. She tried to look into the eyes of her executioner again until 2.04, then at 2.05 we see her head in bed.

In the previous times of the splices there were found the same type of differences, positions of her body and head were in another position each time. I am not sure that the end of this video (2.19) meant end of the fascists' severe torture of this young woman victim.

The Fascist executioners beat girl on one side of the her body using the tip of a flexible stick. This makes punches harder and leaves short marks on the body. Fascists afterward recorded rapes on video and forced this girl as others to perform sex acts on camera, they sell it then. Therefore, one side of the body of these girls remains intact ( the side which is to face the camera), while the girls are still needed and to be kept alive.

At the beginning of the video blood is visible on the girl's clothes in the chest area. Most likely open wounds from the old tortures and because of attempts of the girl to evade beatings.

Kiev junta media, as well as mainstream media of EU/USA are going to use this video against Novorossiya. Our enemies pretend that this is a execution of a girl for going to pub. Allegedly Cossacks from Lugansk republic punished this girl in this way. The media of the fascist regimes of EU and USA used the words of commander Alexey Mozgovoy who a week ago talked about flogging punish girls/women who are spending time in pubs. But this was said as a joke, nobody in Novorossiya is going to flog girls or women.

This video appeared a day after a visit of Joe Biden, at 22nd November. It looks like he gave the order to begin the dehumanization campaing against Novorossiya. I want to note that this video was recorded in a room of some recreation center in Ukraine, the double room there look like this. Fascists battalions captured many resorts in the whole of South-East of former Ukraine. In their bases and centers they perform acts of rape, torture and execution. They dress up girls as prostitutes, and by severe beating the fascists are forcing girls to be sex slave and accept all kind of perversion. Also some of fascists could feel joy during sadistic acts.

In the whole territory of former Ukraine and especially in South- East thousands of girls and women are gone missing. The bodies of girls and women, who were found by NAF in areas near to fascists bases have traces of severe torturers. Some of the females were even decapitated. Information received from occupied cities and towns of the Donetsk and the Lugansk republics, fascists filled the female bodies with assembly foam, beating and severe rape and torture. Female victims who survived the fascists' rape have torn genitals and cannot have children.
This girl in the video is one out of hundreds in the occupied territory of Novorossiya, whom fascists kidnap for use in sex slavery and sadistic tortures. By advise from USA/EU/Israel instructors Kiev junta forces using rape as a weapon against civilians in occupied territories. These are actions of intimidation against the population in the occupied territories.

Video uploaded here, it is evidence of war crime commit by forces of Kiev junta
http://www.liveleak.com/view?i=f0e_1416790149