Russian and foreign students held a public act near the US Embassy in Moscow after the death of teenager Michael Brown in the American town of Ferguson. According to RIA Novosti, more than 150 people stood on their knees and raised their hands, taking the position, in which Brown was, when a police officer shot him. 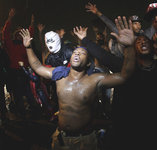 Eighteen-year-old African-American teenager, Michael Brown, was shot dead on August 9 in Ferguson during a clash with law enforcement officers. According to police, the young man received several bullet wounds in the course of a fight in the car. However, witnesses say that Brown was not armed and was shot as he was standing with his hands raised.

The killing of the teenager triggered mass riots in the city that last already for a week. The riots forced Governor Jay Nixon declare a state of emergency on Sunday and impose a curfew. However, the actions only led to increased unrest.

President Barack Obama's speech to the people of Ferguson only made the matters worse. In his address to protesters, Obama urged them to understand the situation and solve problems without riots and violence. The people of Ferguson were expecting that Obama would say those guilty of killing Brown would be held accountable for the crime.

In connection with the events in Ferguson, Russian Foreign Ministry Commissioner on Human Rights, Konstantin Dolgov, advised Washington should solve "large-scale internal problems, rather than interfere with other countries' affairs.

"The authorities of the United States ought to be concerned about large-scale internal problems to take effective measures to solve them. This is a more constructive way that meets the requirements and realities of the XXI century than the outdated policy of intervention in the affairs of other countries to change unwanted regimes under the false pretext of defending democracy and human rights," said the diplomat.

"By requiring other countries should not suppress anti-government protests, the United States government deals shortly with those who actively complain of persistent inequalities, discrimination and the position of second class citizens. As we could see during the recent days, even journalists on duty suffer," said Dolgov.

The Government of Egypt also expressed its opinion about the events in Ferguson. In Cairo, Egyptian officials urged the United States to "exercise restraint" to demonstrators.

Ferguson has been the center of clashes between local residents and police for a week already. The protests began on August 9, after white police officer Darren Wilson killed 18-year-old black teenager Michael Brown, who was not carrying a weapon. Reportedly, Brown was shot six times. Riot police used not only rubber bullets and tear gas, but also firearms against demonstrators.