The Zionist Brutalization Within the New World Order 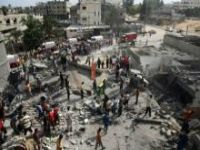 The unprecedented - even by Zionist standards - present massacre in Gaza, clearly shows how massacres like that of the Palestinians, and the proportionately smaller massacre of Eastern Ukrainians,[iii] and Venezuela, which have acted to preserve our collective humanity.

Today, the very concept of humanity is disgraced when an entire people - literally an overwhelming majority of 95%, as shown in the latest polls[iv] - approves of the deliberate bombing of schools, (even when used as UN refugee camps), hospitals and ambulances, as well as the demolition of entire neighborhoods. Even more brutal is the "excuse" given by those who gave the order to repeatedly bomb such buildings and dismember children while asleep or playing in hallways, as this was done in full knowledge of this abominable risk, which they nevertheless undertook because, as they alleged, Hamas was using the children as "human shields". Even if this were true, not only does such an act violate every moral and international law but, furthermore, no military officer who calls him/herself a member of the human race could ever give such an order knowing that it could potentially lead (and repeatedly did lead) to the mass assassination of children!

And if one asks, why all this, we must dismiss from the start the excuses provided by the latest Hasbara, which are obviously addressed to people who stopped thinking a long time ago. I am referring to the supposedly mortal danger created by the Hamas rockets (which mostly fall on open fields and have not led to any significant Israeli casualties for the last couple of years or so), and the similar 'danger' created by the famous border tunnels (which, to my knowledge, have not led to any Israeli casualties so far!). Therefore, the only plausible explanation for the abominable brutality still going on in Gaza is the one that takes into account long-term and short-term considerations. The former refers to the Zionist plan for the ethnic cleansing of Palestine, or what Ilan Pappe, perhaps the greatest Israeli historian, has aptly called "Israel's incremental genocide in the Gaza ghetto".[v] The latter refers to the motive of revenge for the killing of three Israeli youngsters, presumably by Arab jihadists (ISIS have even claimed responsibility for it[vi]) who retaliated to the murder of two Palestinians by Israelis two weeks earlier -- an event that was never mentioned in the West, naturally. Thus, as a liberal Left columnist described it, "in May, two Palestinian teenagers were shot dead by the Israeli army with barely a flicker of interest outside the country.[vii] And yet, the lives of these three young Israelis had to be "paid" for with hundreds of young Palestinian lives, based on the consistent Zionist rule that surpasses even that of the Nazis: 50 (or even 100) Palestinian victims for every Israeli one. In fact, even British Deputy Prime Minister Nick Clegg felt the need to accuse Israel of imposing a "disproportionate form of collective punishment" on Gaza's citizens![viii] Indeed, 80% of those whom the self-proclaimed 'most moral army in the world' has murdered are civilians according to early UN data,[ix] while 95% of the individuals killed by those whom they call "terrorists" have been soldiers. The real terrorist, therefore, is undoubtedly the Zionist state, as asserted by the President of Bolivia - yet the Greek parliamentary Junta was recently engaged in joint military exercises with Israel!

So, those Israelis who danced in Tel Aviv during the slaughter, screaming "in Gaza there's no studying, no children are left there, Olé, olé, olé-olé-olé", and "Gaza is a graveyard",[x] were not extremists. In fact, they were simply expressing the feelings of the vast majority of the population who would not dare to do it themselves. This could explain why the Israeli police did not even think to intervene (the only Zionist concern was to remove the film from YouTube!), when of course any corresponding demonstration in the West, with similar slogans shouted against Israelis, would be drowned in blood and immediately labeled "anti-Semitic". Needless to add that the biggest  "anti-war" demonstration in Israel, (in fact a rather pathetic gathering which was eventually chased down by the thuggish majority)[xi] numbered just a few thousand demonstrators, with slogans in favor of stopping the war and advocating peace, but without any slogans attacking the root cause of the conflict: Zionism. On the other hand, when truly progressive white South Africans demonstrated against apartheid, they did not hesitate to attack the corresponding root cause of that conflict: the racist ideology behind it.

Today, even Zionist Israel makes no secret of its racism, shamelessly trying to impose the "Jewish" character of the state. Thus, Netanyahu has recently initiated moves to bring about "a rare change to Israel's basic laws - which amount to the country's constitution - to insist Israel is "the nation state of one people only - the Jewish people - and of no other people".[xii] This has caused the reaction even of Tzipi Livni, the Justice Minister, who has expressed opposition to "any law that gives superiority to the Jewish nature of the state over the country's democratic values". The practical implication of such legislation would of course be that the return of about 5 million refugees created by the ethnic cleansing that followed the declaration of the new Jewish state, would almost by definition be ruled out for ever. In fact, ethnic cleansing played a crucial role in establishing the Zionist state, as was shown by a young generation of honest Israeli historians like Ilan Pappé and Benny Morris.[xiii] Clearly, people like Ilan Pappe and Gilad Atzmon honor the authentic identity of Jews, unlike the vast majority in Israel and abroad who endorse the crimes against humanity of the Zionists in Palestine, not only disgracing the Jewish identity itself, but also turning most people who are not brain-washed by the propaganda of the Transnational elite and the Zionists against the Jews collectively - which inevitably leads to the opposite kind of racism. It is of course one thing to condemn the advocates of a brutally racist ideology that promotes a state founded on the ethnic cleansing of another people (as was the case with Israel from its origins) and quite another to condemn every member of the Jewish people, regardless of whether they support this racist ideology or not.

The rise of anti-Semitism, therefore, which Zionists lament worldwide and deviously identify with anti-Zionism,[xiv], is due almost exclusively to the Zionist crimes against humanity, which multiplied as soon as the Palestinian resistance against the Zionist occupiers--who kept expanding their state through wars, illegal settlements etc-- flourished. However, part of the blame also lies with the Zionist Left (Noam Chomsky, Amos Oz, et. al.) and their supporters, who never denounced the root cause of 'nakba'[xv] the Palestinian catastrophe itself: the racist Zionist ideology, even though it has been repeatedly condemned as such by the UN General Assembly (naturally, before the rise of the NWO). Instead, the Zionist Left has merely opposed the "atrocities" committed against Palestinians and has kept promoting the so-called two-state "solution". This, in full knowledge of the fact that the two state "solution" was always a scam because Israel - as it has already openly stated - will never allow a truly sovereign state (i.e. a state that controls its airspace, sea space and borders, as well as the direction of its economy) to grow beside it.

In conclusion, the only long term solution was and still is a confederal multicultural state in which all people living in Palestine - Arabs, Jews, Christians and so on - could live together with equal rights in practice, including, of course, the right of return for all Palestinian refugees. The 2007 "One State Declaration"[xvi] signed by both non-Zionist Jews (Ilan Pappe, Oren Ben-Dor, Jonathan Cook, Joseph Massad, et. al.) and Palestinians (Omar Barghouti, Ghazi Falah, Ali Abunimah, Naseer Aruri, et. al.) is a very important step in this direction, and I also have put forward a similar proposal for the liberation of Palestine from both Zionist racism and religious fundamentalism elsewhere.[xvii]

Yet, with each new heinous Zionist crime, the prospects for this unique solution hopelessly diminish...

*This article is an edited and expanded version of an article that was first published in TF's weekly column in Sunday's Eleftherotypia (a Greek daily published in Athens) on 3/08/2014. The translation into English was edited by Jonathan Rutherford.