Conflict between Israel and Palestine evolves into large-scale war

Armed confrontation between Israel and the Gaza Strip continues for days already. On July 10, there was an attempt made to bomb Tel Aviv,  but the missile, fired from the Gaza Strip, was intercepted by Iron Dome missile defense system. For the second time in two days, missiles were fired at Israel's nuclear complex in Dimona. 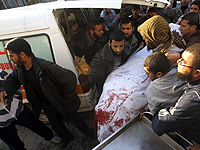 The UN Secretary General will inform the Security Council about the "disturbing and volatile situation" in the Middle East. The Security Council is to assess serious military actions that are being carried out between the Israeli army and Hamas militants in Gaza.

Israeli air strikes were shocking Gaza on Wednesday every few minutes. Palestinian officials said that at least 47 people were killed. According to the BBC, about 60 people have been killed in the Palestinian Authority since Tuesday. Officials say that a half of the victims are women and children.

"Gaza is on a knife edge. I condemn the rocket attacks on the territory of Israel. Such attacks are unacceptable and must be stopped. I also urge Israeli Prime Minister Benjamin Netanyahu to exercise maximum restraint and comply with international obligations to protect civilians. I condemn the growth in the number civilian casualties in Gaza," Ban Ki-moon told reporters.

The UN Secretary General has already consulted with world and regional leaders, including Netanyahu, Palestinian President Mahmoud Abbas, U.S. Secretary of State John Kerry, President of Egypt Abdel Fattah, the King of Saudi Arabia and the Emir of Qatar.

Earlier, Israeli Prime Minister promised that the attacks on Hamas would be activated, and militants would "pay a high price" for missile attacks. Israel claims that the strikes targeted military facilities, including stores of weapons, tunnels and command centers.

Israeli President Shimon Peres told CNN that Israel may soon launch a full-scale ground operation in the Gaza Strip. "The operation will continue until the shelling of our territories stops," he said.

"We warned them. We asked them to stop. We waited for one day, two, three days, but they continued and spread their attacks to several areas of Israel," Peres said. Minister of Intelligence and Strategy of Israel Yuval Steinitz also confirmed the possibility of a ground operation.

Hamas representative Sami Abu Zuhri called Israeli attempts to frighten people with a threat of ground operation "stupid." According to him, soldiers of the paramilitary wing of Hamas are ready to fight against "cowardly" Israeli soldiers in the Gaza Strip.

In the morning of July 10th, IDF Air Force continued to strike targets in the Gaza Strip. As a result of IDF strikes, at least 10 people were killed, including four women and two children; another 15 were injured.

According to the press service of the IDF, as many as 234 missiles have exploded in Israel since the beginning of the conflict. Two missiles were fired at Tel Aviv, but they were successfully intercepted. Israeli Defense Forces have bombed about 600 targets in the Gaza.

Missile attacks on the Israeli territory from the Gaza Strip occur annually. Since 2001, more than 7,800 missiles have been fired on Israel; 32 people have been killed.

The conflict sparked again after three Israeli teenagers were kidnapped on June 12. On June 30th, they were found dead. Israeli authorities blamed Hamas for the deaths of the young men.

The situation worsened last week, when the remains of a Palestinian teenager were found in a Jerusalem forest. The teenager had been kidnapped and burned alive. Six Israelis were detained in connection with the murder.

14:43
Ukrainian refugee, for whom British man left his wife, turns out to be a petty swindler
14:26
Common fruit prevents hair loss and reduces dandruff
14:11
Expert: The US begins the second round of World War III
14:08
Patrushev: Russia is not rushing to end special operation in Ukraine
13:45
Russia slows down offensive in Ukraine deliberately - Defense Minister
13:33
Before surrender, Azov* militants executed civilians at Azovstal
13:20
WHO and ICRC stop vital drug supplies to Donetsk and Lugansk People's Republics
12:59
Russian General Gerasimov 'killed' by Ukrainian militants 'resurrects'
21:55
Moscow to take patronage over Donetsk and Luhansk
21:36
Donetsk forces go on active offensive near Krasny Liman
World
Journalist reveals where the new catastrophe awaits the Armed Forces of Ukraine

World
The Sun: Ukrainian woman ruins a marriage of a British family in ten days
14:11
Expert: The US begins the second round of World War III
14:08
Patrushev: Russia is not rushing to end special operation in Ukraine
13:45
Russia slows down offensive in Ukraine deliberately - Defense Minister
13:33
Before surrender, Azov* militants executed civilians at Azovstal
13:20
WHO and ICRC stop vital drug supplies to Donetsk and Lugansk People's Republics
12:59
Russian General Gerasimov 'killed' by Ukrainian militants 'resurrects'
21:55
Moscow to take patronage over Donetsk and Luhansk
21:36
Donetsk forces go on active offensive near Krasny Liman
21:27
Horoscope for May 24, 2022: Astrological predictions
20:36
Why the West is Anti-Western in the Russia-Ukraine Crisis