The West: Blind, Manipulative and Evil

The Western governments and their propagandists, the corporate media, are acting as if the massacre of Odessa, where Fascists close to the western-backed Ukrainian illegal "government" murdered scores of innocent Russian-speaking civilians in cold blood,  never happened, or else was provoked by Moscow. Now, for the truth. 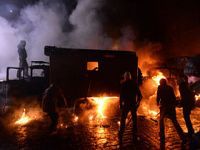 These days it is no surprise to encounter on a daily basis the sheer evil of the Western governments and their propagandists, the bought corporate media - you know, those who claim that a handful of troublemakers number hundreds of thousands, because they manipulate public opinion by copying and pasting photographs taken twenty years earlier, who claim that Moscow is Athens, who claim that the hundreds of Iraqi kids murdered during the US/UK-led invasion are in fact Syrian kids killed a decade later in another country.

And remember Libya where the UNSC Resolutions covering the question, UNSC 1970 and 1973 (2011) stated clearly that there was to be an air corridor established to protect civilians, and no boots on the ground? Then what were special forces from France, the UK and US (the FUKUS Axis) doing inside the country? What was the West doing supporting groups of terrorists (for instance the LIFG) on their own lists of proscribed groups? Remember Cameron saying "This is not about Gaddafi"? Then remember the chorus a few days later "Gaddafi has to go"?

Remember Syria, where the west has been supporting opposition groups with links to al-Qaeda, Salafist mercenaries, Islamist fanatics, who have murdered children, who have sliced the breasts off women in the streets, who have bombed schools, who have used chemical weapons and then blamed this on the Syrian Authorities restoring law and order?

Remember Syria, where President Assad has the support of the majority of his citizens and where any one of the leaders of the opposition groups would have fantasies about garnering some 14 per cent of the vote, at most, to which the western leaders reply "Assad has to go"?

Well, now let us add Ukraine, where a western-backed Putsch ousted the democratically elected President Yanukovich, issued anti-Russian edicts and now has launched an offensive using military hardware against Russian-speaking citizens in the East of the country. How popular this Putsch farse-government must be, if it has to use aircraft, tanks and missiles against its own civilians. What was that the west was saying?

And let us add the massacre in Odessa last weekend, which has passed virtually unnoticed in the West or else presented with an anti-Russian slant as if the victims were the perpetrators.

On Friday May 2, an undisclosed number of people, numbering at least 43 but possibly several hundred, were burned alive in Odessa. They were Russian-speaking citizens who were demonstrating for their rights and who were set upon by a gang of Fascists wearing Ukrainian flags.

They were chased into the Trade Union building by the crowd, which then began preparing Molotov cocktails, and began hurling them through the windows, to chants of "Burn the motherf*ckers alive!" The police stood in the background chatting and doing nothing. Desperate people trying to breathe at the windows were pelted with missiles and insulted and told to jump. Some did, and were kicked to death by the Fascists gathered below.

Many Ukrainian nationalists posted gloating and triumphant messages on Facebook. This is what Washington describes as "proportionate and reasonable"?

I am not posting footage of the incidents but will post this link for those who wish to see who and what the west is supporting in Ukraine. If anyone has an iota of decency, they will find out who is their representative in Congress or Parliament and hold them to account as their representatives in Governments which support these monsters.

WARNING: Graphic images on the link

From Kiev, promises of an investigation. An investigation? Like the one into the shootings in Independence Square, Kiev, in which shots were fired from anti-Yanukovich protesters from the eighth and ninth floors of the Hotel Ukraina at the police and then at their own protesters, to incriminate the authorities and create a cause?

Maybe the snipers were not even Ukrainians. Maybe someone should find out whether any Americans were registered entering Kiev airport after February 10, 2014. And maybe we should find out what Messrs. Kerry and Biden have been instructing their poodles in Kiev to do. Burn citizens alive and then call it a "proportionate and reasonable" response?