The war in Syria identified who is who in the alignment of political forces in Russia, clearly defining the position and interests of not only pro-Western comprador social groups, but also religious extremist movements. Sergei Baburin, Russian politician, Chairman of the Committee for Solidarity with Libya and Syria, provided the analysis of this situation for Pravda.Ru. 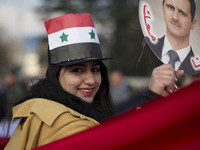 The second round of talks in Geneva on the Syrian issue has ended with uncertain results. The topic of the conflict in the Middle Eastern country is coming to the fore again, drawing the attention of the Russian public and political leaders. Sergei Baburin believes that there is consensus in the assessment of the Syrian war in the country. "It was triggered by the dramatic situation in Libya, where the position of the Russian Federation has failed to prevent the tragedy, and, by and large, the Russian Federation and its apostasy facilitated the murder of Gaddafi, and the fact that Libya was plunged into chaos."

When Russia took a firm position on Syria, and President Vladimir Putin was able to turn the course of the events so that they were acceptable for the Americans, Russia and China, Iran, and Syria itself, "we have finally acted as a great superpower." The consensus has finally emerged: not only we cannot give up Syria, it is not only shameful to think of apostasy from friends and allies, but it is time to move from understanding of the foreign policy to concrete steps, the politician said. Today, the society as a whole supports the actions of the Ministry of Foreign Affairs and the President of the Russian Federation.

Baburin believes that today the Russian National Union and the majority of patriotic opposition express critical loyalty to the leadership of the Russian Federation. They negatively assess the activity of the government ruled by domestic neoliberals as it is not good for the economy and the country.

Meanwhile, we can draw an analogy between Russia and Syria that also has two kinds of the opposition. Patriotic opposition led by Qadri Jamil supports the country's leader Bashar al-Assad, which cannot be said about the opposition led from Istanbul. Sergei Baburin believes that the opposition represented by immigrants from Syria in Istanbul cannot be called Syrian. Their position is that the invasion of Syria may happen with their permission, but it cannot be done without it. This is nonsense, these are individuals gathered outside of their country, they cannot give foreign powers their consent for the invasion to their homeland. Besides, these people were not elected by anyone, nobody empowered them, and it would be incorrect to call them the opposition, they are simply enemies.

The Chairman of the Committee for Solidarity with Libya and Syria Sergei Baburin believes that it is not the opposition and the rebels fighting against Bashar al-Assad and his government, those fighting are mercenaries from other states irrelevant to Syria and funded by Qatari money. Therefore, when the West is trying to present the conflict as a civil war inside Syria it is not true, It is a foreign invasion. "This is why the population is generally helping the army and the official authorities, because they see who is who. Besides, it is not a civil conflict, essentially an army from abroad is invading Syria, and this army has not only pistols and machine guns, the weapons of terrorists, but heavy machine guns, tanks and artillery."

Is it possible in such circumstances to hold presidential elections in Syria in summer of 2014? Sergei Baburin is confident that they must be held within the statutory period. Bashar al-Assad, no doubt, will be the leader of the majority of Syrians, and this is confirmed by the American CIA forecasts. It is therefore important to ensure that all citizens have the opportunity to vote. This includes the territories where more mercenaries create outrage. Undoubtedly, it is necessary to take into account some of the shortcomings of the electoral law in Syria that have been identified in the last parliamentary elections. However, as the expert says, when the Americans came to Iraq, they organized parliamentary elections. Few people know that in order to ensure the safety of the candidates the ballot had no names, but numbers under which candidates were recorded. "90 percent of the voters voted for the Iraqi parliament deputies without knowing their names. Nevertheless, the West has swallowed it, recognizing the elections as democratic. The shortcomings of the electoral process in Syria are not fundamental."

Describing the results of the negotiations Geneva -2, Sergei Baburin stressed that Syria strategically won time. This is very important, and the course of negotiations becomes secondary. It is important that Syria is trying to secure a cease-fire and restoration of order However, the composition of the negotiators is incomplete without representatives of Iran whose position on Syria is one of the most decisive. The attempts of the U.S. and its allies to remove the key players from the negotiation process and extend negotiations by bringing in opposition under the guise of people who do not have a serious weight in Syria are futile.

"Hopefully, representatives of the foreign opposition will understand it and compromise," the expert said.

Speaking about the fact that since the inception of the conflict the ranks of the Syrian opposition abroad were joined by former ministers, the Prime Minister and Vice President of Bashar al-Assad administration, Sergei Baburin expressed the belief that these characters do not have a political future in Syria.

"No one likes traitors," said the politician. "The opposition to which these former officials adjoined will be the only one that has a chance. Those who formed their views oppositional to Assad before the beginning of the conflict, those who have been the backbone will have a chance. They have a chance to return to Syria as political figures. Will those who joined them be political figures? Someone will be, but the majority of the defectors have no prospects. They have no choice but to make money on protest. We did not assemble Geneva for them, and hopefully our European neighbors understand this."

It is important that all the elections, including parliamentary one, are held in time, providing the opportunity to vote for all, including refugees and political refugees. In multi-confessional Syria all religious groups must be heard, otherwise Syria will get its Kurdistan.

"Another issue related to the Arab East is extremely important for the Russian society. Will President Putin cancel a decree of President Medvedev that among other things prohibits members of the Gaddafi family to enter Russia under a threat of arrest?" Sergei Baburin believes that the primary task of the Russian public associations is to make such a request to the president of Russia. The Russian society must seek justice for the Gaddafi family. We must remember "that only those mistakes that are not corrected are mistakes. So let's correct them," concluded Sergey Baburin.