After the September 11 attacks in 2001, the CIA recruited members of al-Qaida prisoners in the concentration camp in the illegal U.S. base/concentration camp in Guantanamo Bay in Cuba, to convert them into double agents and send them to their respective countries to help United States to " hunt down " terrorists. 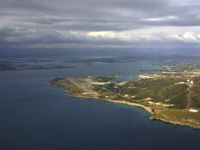 CIA recruited prisoners from Guantanamo during the Bush administration - After the September 11 attacks in 2001 , the CIA recruited members of al-Qaida prisoners in the concentration camp in the illegal U.S. base in Guantanamo Bay in Cuba, to convert them into double agents and send them to their respective countries to help United States to " hunt down " terrorists.

With this goal what is commonly called Penny Lane was established, a secret few meters of administrative offices of the prison facility, reported British daily The Telegraph, quoting U.S. officials and active retirees.

When detainees began arriving at Guantanamo in 2002, the CIA saw an unprecedented opportunity to try to identify the terrorist leaders, and promised them some freedom, security for their families and millions coming from secret accounts of agency dollars.

Candidates were transferred from the common prison cells to comfortable dwellings in Penny Lane, the defendants designed to feel more like in a chain of hotels, thus justifying the nickname "Marriot Hotel" for the center, and where even pornographic materials were allegedly provided for prisoners if requested.

Sources indicated to the British daily that dozens of prisoners were evaluated, but only a few managed to meet the requirements of the CIA for the program, which ran from 2003 until 2006.

"Although the figure of double agents recruited was small, the program was significant enough to attract the attention of President George W. Bush. Some inmates who passed through Penny Lane helped the CIA find and eliminate many militants of Al-Qaida", indicated the sources.

Also there is the case of double agents who stopped cooperating with American intelligence, which also would have lost their trail.

Washington's greatest fear is that the former agents are captured by other countries and provide details about their work for the CIA.

Photo: Guantanamo Bay,home to the US concentration camp
Vermelho.org.br with agencies