The police of Kosovo arrested six Albanians in Pristina and Gnjilane suspected of preparing terrorist attacks. Reportedly, the detainees were preparing an explosion of one of the man-made lakes to flood several villages. There are reports saying that Kosovo is being converted into a base for training terrorists. In general, the boomerang, launched by the West, is back. 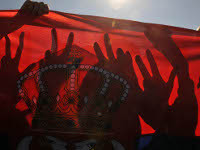 Al-Qaeda has established itself firmly in the self-proclaimed Republic of Kosovo, where the order is supported by NATO forces, consisting, inter alia, of U.S. troops. The police had been keeping tabs on an immigrant from Syria, Abu Hafs al-Albani for quite a time. In his house, a large quantity of arms and remote-controlled explosives were found after his arrest, the Serbian website novosti.rs said with reference to a spokesman for the Kosovo police. The official said that the group of Albani, acting on behalf of Syrian group An-Nusra (that sworn to the head of Al-Qaeda, Ayman al-Zawahiri) planned terrorist attacks on religious grounds in the entire territory of Kosovo. The second detainee is suspected of attacking Mormons at the end of last week, U.S. citizens, who were distributing religious literature in Pristina.

The special mission of the European Union in Kosovo (EULEX) investigates eight cases of terrorism in the breakaway republic. Four of them are in their preliminary stage; charges were brought down against two individuals. Albani is an ethnic Albanian, who went to Syria a year ago, where he fought with hundreds of other Albanians on the side of jihadists. On his return home, he began to prepare terrorist acts. Serbian media, referring to Iranian news agency FARS, reported that it was a Turkish humanitarian organization that recruited Albanians for Syria in Kosovo. The last group consisted of 90 people.

One of them, known as Abu Abdullah al-Kosovo of the Islamic State of Iraq and Sham (or the Levant, ISIS), in a video message released on the Internet called on European Muslims to put aside their European comfort and go to fight in Syria. Employees of Western intelligence agencies are concerned that Western Muslims will be radicalized in Syria. "Security agencies believe that about 1,000 volunteering jihadists from all over Europe are now fighting in Syria, compared to only 250 at the end of 2012," says Der Spiegel. "About 90 of them are from the UK, 120 - from Belgium, 50 - from Denmark and 150 - from Kosovo."

"The Syrian jihad raises particular concerns, given how easier it is to reach Europe from Syria than, let's say, from Pakistan, Afghanistan, Yemen or Somalia," a German security officer said. Moreover, Western intelligence services fail to monitor the spread of this infection. "The reality is that we can not keep track of all those coming from Syria," the German newspaper wrote. In the wake of the above-mentioned arrests, a previously unknown terrorist group appeared, Jihad Kosovo. The group informed via email that the police of the region would become the target of a "terrible attack, unless the arrested individuals were released.

According to Serbian military analyst Milovan Dretsun, Syrian opposition members receive military training in Eastern Europe, in Kosovo in particular. "The center of the Kosovo Police Service in Vucitrn is under direct patronage of certain Western intelligence agencies, primarily British and American ones. They converted the Kosovo Police Academy into a training camp for the Syrian opposition, primarily radical Islamists, some of whom are members of al-Qaeda from different countries, from the countries of the region in the first place. After training, they will be sent to Syria to organize sabotage and terrorist acts," Dretsun told the Voice of Russia.

The Associated Press also reported that on April 26, a delegation of the Syrian opposition, on the way from the United States, made ​​a stop in Pristina to negotiate the use of the experience of the Kosovo Liberation Army (KLA) in Syria. Well, history repeats itself, and it is far from farce. Kosovo-trained rebels turned their weapons against their teachers and patrons. The United States and Britain, fueling the training of terrorists in Kosovo, reap the fruits of their irresponsible policy. "Returnees" may appear in the cities of Europe and the United States any moment. Thus, according to the AP, ethnic Albanians from Kosovo and neighboring Macedonia were associated with the preparation of the thwarted terrorist attack in Tampa, Fla. and in 2007, they attacked Fort Dix in New Jersey.