Russia can be next after Syria 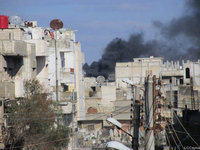 The situation around Syria sharply escalated on August 21, when there were reports of the use of chemical weapons near Damascus. The information was distributed from the opposition, which, of course, accused the Syrian government of the attack.

In turn, the official Damascus vehemently denied any involvement in the attack. The government stressed out that toxic substances had been found in the bunkers, taken from the opposition in the suburbs of Damascus.

Despite the fact that the side responsible for the chemical attack has not been established yet (UN inspectors went to the suburbs of Damascus, where attack occurred), the United States and Britain have begun to build up their military presence in the region. Western politicians do not hesitate to announce their readiness for the military intervention in Syria. Washington and London have the support of Paris. Turkish Foreign Minister Ahmet Davutoglu said that his country would join any international coalition against the Syrian authorities, even if no agreement on the issue would be achieved in the UN Security Council.

The head of the British Foreign Secretary William Hague said that the evidence of the use of chemical weapons in Syria may have already been destroyed.

Russian Foreign Minister Sergei Lavrov said in a telephone conversation with U.S. Secretary of State John Kerry that Moscow was extremely concerned about the news of hte possibility of U.S. military intervention in the Syrian conflict.

"The impression is that certain groups, including those, who call for military intervention in circumvention of the UN, are frankly trying to ruin the joint Russian-American efforts of the recent months to convene an international conference on the peaceful settlement of the crisis," said Lavrov.

Russian politicians commented the situation around Syria and the measures that Russia could take in this connection.

Chairman of the Central Committee of the Communist Party, Gennady Zyuganov

"What do you think about the actions of our country in the Syrian conflict?"

"Russia still takes a principled position. It is shared by many countries, the UN Security Council (UN) the modern superpower - China. In the last 150 years, mankind has seen 12 crises of capitalism. There are three ways out of these crises: revolution, dictatorship and war. Modern capitalism looks for ways out of difficult situations with the help of military adventures. It was so in Iraq, in Afghanistan. In Libya, the French and the British  are zealous, taking into consideration the fact that they have their own interests there."

"How do you assess the probability of military intervention of the West in the Syrian conflict?"

"I do not exclude any version of events. But this is a great excuse to destabilize a huge region. It will lead to most serious consequences. The Americans feel uncomfortable to go there - they have not finished with two other bloody conflicts yet. They  are looking for an excuse. The effrontery, with which they are trying to portray that it was the Syrian government that used chemical weapons, simply amazes me. Back in the days, the Americans were about to find  Saddam Hussein's weapons in his palace, under the bed. Chemical, nuclear and biological weapons require highly professional handling, storage and use. When they say that there were biological weapons used, it is difficult to take it as justification. But, nevertheless, they did it in Iraq. Now it can be the same in Syria."

"We must remember that in today's world, the strong, smart and successful are respected. In the Mediterranean Sea, at the time when there was a war between Israel and Egypt, the Soviet government decided to prepare for a military action. The Americans called five hours later and said - take it back, and the war will stop. The war ended.

"Now we can and we must protect. We must help, support and protect Syria; we must constantly keep it in mind that we will be next after Syria. It may be too bold a statement, but not that long ago, we could not even imagine that NATO would be the master in the Baltic, that SS legionaries would march on the streets of Riga. Nobody thought that there would be such a mess in Central Asia, and no one thought that in North Africa, where Egypt was the leader, all would turn into a bloody drama. Today it has become a reality."

"Russia has started working from the point of view of the declaration that the issue should be resolved exclusively by peace agreements. The expected actions can be a repetition of the old huge mistake that they have made. The arrival of NATO forces will not create a peaceful environment. The disease will at best be driven deep inside. In the worst case scenario, it will be an open opposition, in which many people will suffer. The state itself (Syria) can turn into a colony.

The support for these initiatives from Britain and France is at least surprising. France is quite a restrained state, and in this case the support of such a thoughtless action is a big mistake, I believe."