Egypt/US - Horns of a Dilemma 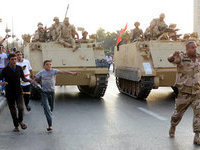 This democracy that is touted by the "West" is nothing more than mass people control.  Sheepeople are so easily lead by slogans, repeated ad infinitum ad nauseum.  Look at every major uprising, every Jacobean revolt and you will identify the people's cry.  Foremost among these cries, is Freedom, Democracy, Justice, Equality; all nouns that have different meanings to those whose mouths shout the call. Those who perceive the call, likewise imagine a state that suits their desires. Thus the slogans are universal and have been trumpeted throughout the ages to lead men off to wars and or to kill, maim and mutilate their fellow brother all for some state of utopia that they cannot understand or fail to rationally discern.

The problem with democracy is; democracy is bought! You thought that you had a free vote, that somehow your vote meant something. Well, those who espouse democracy certainly want you to believe that because it is in that misguided perception that they obtain their position through the exercising of their power [control] of money.  Regardless of who you vote for in the Western styled democracies, you will get not who you really need, or want, but who "they" want you to get. Mostly, we have a two horse race for the highest seat in the country. Regardless of who gets elected, be it Labour or National, Conservatives or Liberals, once elected the major policy decisions will have already been decided and will be enacted by whatever party is elected.  The elected one is left to tinker with relatively insignificant [in world terms] domestic policy.

I see there are sceptics out there - finding it too hard to come to terms with the fact that they have been lied too all their lives and are lead like sheep to the slaughter.  There a plenty of examples of this sort of treason, but let's just look at one case in history; America's entry into WWI.

Some of you will know, without going to the history books, that America voted overwhelmingly to "stay out of the European war".  The President campaigned on the promise to "keep our boys out of the war".  So just how did America, so firmly against going to war in Europe, get involved, and so quickly? To answer that, we need look at what was happening in Europe 1914 - 1916. Britain, the Commonwealth and France, were at war with the Central powers [let's not investigate how that started either]. By 1916 Britain and her allies were soundly defeated, the French army on the brink of mutiny; the Battle of Verdun, fought through almost all of 1916, had destroyed the French soul and spirit with senseless murder as they tried to win a battle of attrition with the German forces.  Britain and her commonwealth armies had been pushed across Europe by the advancing Germany army and in every battle had been soundly defeated.  The staggering losses suffered as incompetent Generals marched rank upon rank of soldiers against machineguns, in some delusion that somehow the bullets would not affect them, had bleed the reserves of the nation(s) dry. Serious questions were asked in Westminster and the Prime Minister secretly sought ways to end the war.  [Peace with honour - is there such a thing?].

Enter the Zionist Jews, these International Travellers who foresaw yet another opportunity to be made from human suffering. Chaim Weizmann and the Zionist plotters told the British not to surrender but hold off and they would get America into the war on Britain's side and thus win the war for Britain. The pay-off for this would be the ceding of Palestine to the Jews for a new Israel. [For this to happen, the Central Powers, who controlled Palestine, had to be defeated and Palestine declared a British protectorate].  This agreement was made in 1916! It was made behind closed doors, in dark rooms and under the veil of utmost secrecy. It had to be kept secret because plotting had to proceed without the public being aware that they were being "used"; else they may have seen through the deception.

Immediately the Jew controlled News media and the Jew sympathisers in the respective British and American governments/administrations, began the process of demonising Germany and orchestrating events - such as the despicable event of the Lusitania, so as to portray Germany as the villain and to sway public opinion towards going to war. All the time, the Balfour /Weizmann agreement was held secret.  You can all follow the tragic series of orchestrated events [1916/1917], which lead up to the American declaration of War against Germany on 6th April 1917. All of these events were planned by the Zionist Jew sympathisers with the express purpose of turning public opinion - of leading the Sheepeople to war. It was not until America was firmly committed to the war that the Balfour Declaration [agreement] was made public - here it is:

I have much pleasure in conveying to you, on behalf of His Majesty's Government, the following declaration of sympathy with Jewish Zionist aspirations which has been submitted to, and approved by, the Cabinet.

"His Majesty's Government view with favour the establishment in Palestine of a national home for the Jewish people, and will use their best endeavours to facilitate the achievement of this object, it being clearly understood that nothing shall be done which may prejudice the civil and religious rights of existing non-Jewish communities in Palestine, or the rights and political status enjoyed by Jews in any other country."

I should be grateful if you would bring this declaration to the knowledge of the Zionist Federation.

And so the rest is history - as they say. For those of you who cannot see; or do not want to see, the manipulation, the duplicity of these Zionist plotters, you really should change to another channel.

Having made the case for how we are manipulated and how governments collude to bring about events and to steer a course which suits their agenda, rather than the actual wishes of the people; we turn our attention to Egypt.

Most of you will be well aware of the plethora of evidence pointing to the multitude of revolutions around the globe, sponsored by the CIA; so much so, that the name CIA has become synonymous with regime change.  So as to detract somewhat from the evil and despicable acts perpetrated by these plots, they [or others] have coined a euphemism for it -  "Coloured Revolution".  Their most recent notable failure was the Rose Revolution in Georgia and that was foiled by Russia.

Don't think for one moment that the MOSSAD have been sitting back watching these revolutions cascade around the world and not plan their own. They have and they did. Now we have a euphemism - "Arab Spring" which refers to the turmoil and tribulation going on throughout the Arab world over recent years.  [I would include Iraq as part of this revolution].  To destabilise their Arab neighbours and cause economic collapse and political turmoil in these countries, MOSSAD, with the complicit assistance of the CIA have embarked on a series of regime changes throughout most of the Middle East. The reasons behind the revolts is clearly spelt out in some of my other writings as part of the "Greater Israel Security" and is in reality, just a continuum of the Balfour Agreement which set into motion the creation of a bastard state. The reality is, without a state of Israel, we would not have theis contagion wars and revolutions.

The toppling of a "strongman" in Egypt was part and parcel of this destabilising mechanism - Mubarak was holding Egypt together [much as Assad is in Syria] and while he was in power, it was difficult to influence him or events inside Egypt; very hard to weaken Egypt with him in charge. While Egypt was strong it was a military threat to the Zionists and also a polarising nation for Arab unrest.

The plotters had their wish - the people had spoken! There were free elections in Egypt.  However, even with the best that money could buy and the most sophisticated vote rigging, they could not head off Morsi. Perhaps the people really had spoken! Morsi was not the West's choice and be damned; he was connected to the Muslim Brotherhood.  While he had not spoken of a sectarian agenda, plenty of others were willing to suggest one for him.

Factional groups of Al Qaeda splintered off after the loss of Osama's Bin Hiding, and one, headed by Sheikh Nabil Naiim  who it appears favours splitting off the Sinai from Egypt and giving it to the Palestinians as a "homeland" allowing Zionist Israel to make a real land grab for all of Palestine. Quite naturally, this is of significant interest to the Jews and MOSSAD sponsors Nabil; who in turn bad-mouths is rival as being a CIA stooge! Needless to say Morsi isn't too pleased about giving up land either.

Whooa, what's going on here you say? Trouble in Paradise. The CIA and MOSSAD not singing from the same hymn book?!  Well, yes, that's exactly what's happening.  The Jews have never been a "reliable" intelligence partner; happy to take a share [actually, demanding a share] of the collective intelligence, but not willing to share what they get. The rationale behind this is that their objectives are selfish, they are an Israel first only policy; the rest of the world can go to hell. So, Israel picks and chooses what Intel it will share, depending on where they think that Intel will take Israel.

While the world is starting to warm to the idea that the Jews should go back to the 1967 borders, with current events in Egypt, they see an opportunity to expand their boundaries and further exploit human suffering.

This is where America now finds itself on the horns of a dilemma.  After championing democracy and begin vociferous condemning coups and subsequent dictatorships; America can now hardly be seen as "supporting" a coup - even though it has a desired outcome for them. The coup on the other hand, is not likely to be the outcome the Zionist wanted unless, they perceived a greater threat from the consolidation of the Muslim Brotherhood and the emergence of another "strongman" leader in the shape of Morsi.

How it was played out is quiet simple, America gives Egypt 1.6 Billion a year in aid.  The threat of a reduction or cessation of aid [some of which no doubt goes into pockets somewhere] and a word in the ear of the military command that if they were to orchestrate another election then certain military hardware would be made available and you have overwhelming motive for a coup!  [Just check out what new military hardware the Egyptians have got from Uncle Sam].

The State Department can sit back now and say "well you know, we don't approve of coups" and at the same time - say nothing against it!

Now Egyptians dance in the streets, content that they have had their say and that democracy has triumphed - the Army has listened to the people.  The Morsi faction can rightly point to the ballot box and say we were robbed.  That's democracy for you.

Egypt is poised for more blood-letting as a colonial power and an upstart Bastard state play with sheepeople who believe in democracy.