John Kerry's mission is in jeopardy. The United States continues to put pressure on the Israelis and Palestinians in order to speed up the resumption of peace talks suspended in 2010. This week, U.S. Secretary of State John Kerry was going to visit the Middle East, but his visit was postponed because of consultations on Syria in the White House. 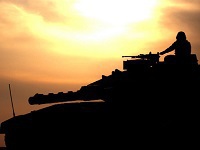 The attempts to resolve the Palestinian-Israeli conflict have not been effective so far, despite many efforts by Western politicians and diplomats. From the very beginning Israel has not been very enthusiastic about the peace initiatives of John Kerry who supported the idea of ​​a return to the 1967 borders in exchange for peace with the Arab countries. The Israeli government supports the resumption of negotiations with the Palestinians without any preliminary conditions.

Jerusalem fears that serious territorial concessions may adversely affect the country's security. The issue of the release of Palestinian prisoners also causes major controversy. Recently, a senior member of the Fatah Al Sheikh Hussain stated that he considered the release of 120 Palestinians as a condition of returning to a peaceful dialogue with Israel. The Palestinian Authority has appealed to U.S. Secretary of State John Kerry with this request.

All 120 prisoners whose names appear on the list provided to the Americans were detained before the signing of the Oslo Accords in 1993. Israeli security authorities have acknowledged that their release would not endanger the national security of Israel, information portal Jewish.ru reported referring to the statement by Fatah Hussein Al Sheikh. Most Israelis do not support unilateral concessions that could lead to unpredictable consequences. According to a survey conducted by the Smith Institute, 68 percent of citizens believe that the transfer of Judea and Samaria to the Palestinian control would adversely affect the security of the Jewish state.

However, the West is now more concerned with the aggravation of the Syrian conflict than the problem of the Palestinian-Israeli peace settlement. So far the situation in the Gaza Strip and the West Bank remains relatively calm, which cannot be said about Syria and Lebanon. It is no accident that Kerry postponed his visit to Israel and the Palestinian Authority planned for this week. He had to participate in an important consultation on the Syrian issue held in Washington DC. It is not ruled out that the White House would consider possible options to further assist the Syrian armed opposition. The situation deteriorated after the rebels lost strategically important city of Qusayr.

Recently, the deputy head of the British Foreign Ministry Alistair Burt in charge of the Near East region said that the failure of John Kerry's mission would have serious consequences for Israel. Burt said that the risk of international isolation of Israel was greater than ever and that Britain was very concerned. The announcement came amid a scandal with the documents published by the office of Benjamin Netanyahu on the occasion of the visit of Prime Minister of Israel to Poland.

The text of the joint declaration that Benjamin Netanyahu and his Polish counterpart Donald Tusk were going to sign in Warsaw said that no one has ever doubted the right of the Palestinians to their own state, and unilateral steps by Palestine and Israel did not contribute to the promotion of peace. The text was so different from previous declarations of Netanyahu that the journalists asked the office for clarification and received a reply that it was correct. As a result of a "serious approach" Netanyahu once again been called into question, and the office reported that the text was mistakenly written and published by a low-ranking official at his own risk, the Israeli portal Israland reported.

Most analysts are moderately optimistic about the prospects of the resumption of the Arab-Israeli peace talks. So far both parties have not moved beyond declarations of good intentions and have not taken any steps that would bring peace to the region. The Israelis do not hide their indignation with the fact that the Palestinian side set a number of conditions for Jerusalem. The Palestinians, in turn, accused Israel of deliberately continuing to build settlements in the disputed territories, which in itself does not contribute to the initiation of talks.

The European Union and the United States have also expressed their concern with the unveiling of plans for the construction of new Jerusalem homes in the West Bank. Al-Arabia quoted the statement by Patrick Ventrella, a representative of the State Department, who said that the Israelis must acknowledge that continued settlement activity was counterproductive to peace. He added that independent Palestine should be viable, with real boundaries that must be respected.