Syria very hard a nut to crack for USA

For two years, the West has been trying to convince the international community that terrorists in Syria are not terrorists but fighters for freedom and democracy. Governments of the United States, Europe, Saudi Arabia, Qatar and Turkey have been helping the rebels to conduct military operations against the Assad regime with no results. This made the West fight with Assad through economic methods.

For two years, the West has been trying to convince the world that that black is white, and terrorists in Syria are not terrorists but instead are fighters for freedom and democracy. For the past couple of years, the governments of the United States, Europe, Saudi Arabia, Qatar and Turkey have been helping the rebels to conduct military operations against the Assad regime. Apart from many thousands of victims, this war yielded no results. The West decided to fight with Assad through economic methods. 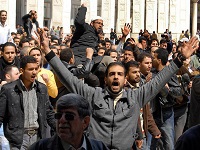 The West considered its options and realized that if the country cannot be won, its economy can be destroyed. The legitimate government of Syria called the EU's decision to weaken the embargo on the purchase of Syrian oil, which would allow purchasing oil from the opposition, aggression. Syria demanded that the UN Security Council takes the necessary measures that would impose a veto on the implementation of such illegal decisions of the EU which, incidentally, contradicts the UN Charter and international law.

The Syrian authorities urged UN member states not to support terrorists. In Luxembourg, the EU Council decided to soften sanctions on oil imports from regions of Syria controlled by the rebels. European companies are now able to purchase oil from Syrian rebels, sell oil extraction equipment and invest in areas controlled by the opposition. This decision, according to the EU, should help the country's opposition.

The EU has already realized that a quick resolution of the Syrian conflict should not be expected, and decided to weaken the Assad regime through economic means. "Syria reserves the right to use all measures necessary to protect its sovereignty, in particular, the natural resources from pirate plundering," stated Ministry of Foreign Affairs of Syria.

It should be noted that the EU has imposed an embargo on oil from Syria in September of 2011, when Assad refused to stop military operations against the rebels. The conflict in Syria between the government and the opposition began in March of 2011. During this time, according to the UN, over 70,000 people in the country have been killed. The Syrian authorities confront well-armed and well-trained local militia and foreign mercenaries.

Many international experts have racked their brains over the reason behinds the West's desire of military action in Syria. It seemed illogical to throw millions of euros for the support of terrorists of Al-Qaeda, as well as the Syrian Free Army, given the ongoing financial crisis, problems with countries such as Greece and Cyprus. But the answer is simple. The West is interested in overthrowing Bashar al-Assad and seizing all reserves of Syrian oil and gas.

According to the published data, their reserves would allow Syria to become a leader in the supply of "black gold." According to Lebanese television, a Norwegian company conducted geological surveys of territorial waters a few years ago in Syria and discovered 14 oil pools. Four of them are the largest deposits located near the Syrian city of Banias.

The reserves of these fields are comparable with oil reserves in Kuwait. Four other deposit reserves are equal to Lebanese, Israeli and Cypriot ones combined. Damascus could produce 6.7 million barrels a day, which is 50% of the volume produced by Saudi Arabia. Syria with its oil is a tasty morsel for the West. This is precisely why it was dragged into the abyss of "Arab revolutions". The U.S. thought it could quickly remove the Assad regime with the rebels, but the Libyan scenario did not work out. It was therefore decided to impose economic sanctions. Many analysts do not rule out a direct military intervention.

In recent years, many experts have been talking about a possible foreign military intervention in Syria. For example, the U.S. announced possible reasons for an invasion. President Obama stated that the U.S. would use force in the event of a relocation of chemical weapons or its use. Another reason, according to the American politicians, is the use of chemical weapons against the civilian population. At the same time, Washington does not mind the absence of UN Security Council sanctions.

State Department spokeswoman Victoria Nuland stated that the U.S. wanted to stop the bloodshed in Syria. According to U.S. analysts, the Pentagon has already figured out a way to take Syrian chemical weapons away. Secret objects in the country should be captured by the U.S. special forces. Washington does not intend to go to Syria alone. Turkey and the United States established a "group of operational planning" that discusses possible ways of overthrowing the regime of Bashar al-Assad.

Now a military intervention looks like the only sure way to overthrow the Assad regime. The West realized that the fighters it financed would not be able to win the civil war. The Syrian army took the initiative and cleared Damascus and Aleppo of rebels. But foreign investors cannot allow the defeat of the Syrian revolution. With this outcome the United States, Europe and the Gulf States would lose face, and Turkey may forget about its plans to become a regional leader.

The most important thing is that the Syrian oil will remain in Syria, and this is a great deal of money. Despite all these reasons, the chances of a full-scale military operation in Syria are quite small. This is provided that Damascus does not do anything crazy. In the absence of unruly actions (use of chemical weapons, etc.) the United States is unlikely to start an intervention. At the very least, Obama will not do this. He is trying to position himself as a peacemaker who withdrew troops from Iraq and Afghanistan. He is unlikely to send troops into yet another Islamic country, spending a lot of money of American taxpayers.

Without participation of the U.S. Europe is not ready to fight in Syria. The Libyan campaign has shown that European armed forces are incapable of independently conducting a full-scale military campaign. Almost immediately after the bombing of Jamahiriya it turned out that Britain has enough cruise missiles, and other countries have run out of money. As a result, the entire burden of the war was placed on the shoulders of France and Britain.

It is unlikely that Europe intends to repeat its Libyan mistakes in Syria. Turkey could help Europe, taking on the role of the main force in Syria. This country has a fairly strong army and its own interests in the country. But even after the incident with a Turkish spy plane shot down by Syrian air defense, the Turks showed restraint, limiting themselves to rhetoric. In Turkey, there is no unity between the military and the government. The generals are openly saying that they should not be sending troops into Syria. Given that the relationship between Prime Minister Erdogan and the generals are quite complicated, it is unlikely that the prime minister will ignore the army.

The biggest proponents of intervention to date have been the monarchies of the Gulf. Syria for them, above all, is a chance to strike at Iran. Also, they want to deprive Iran of the window to the Middle East (Iran conducts a significant part of its foreign operations through Syria) or to provoke a war between Syria and Iran coalition forces. However, Qatar and Saudi Arabia have no powerful army to conduct military operations in Syria, let alone a conflict with Iran. So far no one is ready to start an open war in Syria. The West has to fight in Syria through other means (by supplying the rebels with weapons, money and bringing new mercenaries). But this is not enough to topple the Assad regime and economic levers must be used. Will this help? Syria turned out to be very strong.