Against the backdrop of recent deterioration of the relations between South Korea, DPRK and the U.S. associated with the UN resolution and the trainings on the southern half of the Korean Peninsula, the question about the threat of North Korean missiles becomes relevant. Mostly, this threat is related to the possibility of Pyongyang using ballistic missiles to deliver nuclear warheads.

Even disregarding the fact that North Korea currently does not possess ICBMs (intercontinental ballistic missiles), deployment of this type of weapons at the head of tactical missiles and tactical systems causes neighbors to bring their armed forces to alert after any belligerent statements. 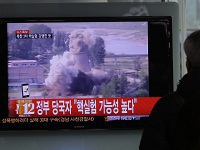 "Nodong" have even shorter range - 900-1,300 km and very low precision CWE - 2.5-3 km. Lack of precision is not that important if nuclear warhead missiles are used for destruction of large areas (like a city). There are 10 CPs and 90-200 missiles available.

They are followed by the operational-tactical and tactical missile systems, most of which are out of date, with the exception of improved versions. First of all, these are complexes "Scud" and "Tochka." "Moon" complexes presented in the armed forces of North Korea have two modifications, SS-1A and SS-1B Scud A under NATO classification. They are able to fire rockets at ranges of 45-70 km. There are 24 CPs available.

North Korea's missile arsenal can be a serious threat to the entire region, which is greatly enhanced by the presence of nuclear weapons. Only the top military leadership of the Korean People's Army knows how many missiles the army has and what type. Without exaggeration, some Korean missiles are capable of carrying a nuclear warhead that can hit any target not only in South Korea and Japan, but even on the island of Guam, which is a territory of the United States with a major military base for strategic bombers. In this regard, there is nothing surprising in such close attention to the situation on the Korean peninsula, because any conflict there could escalate into a global nuclear war.