Today Nigerian and Somali piracy poses the same level of threat for the world as terrorism. Piracy in the 21st century rose to an unprecedented level. Neither local authorities nor NATO warships are able to put an end to uncontrolled gangs armed with machine guns and machetes. Pirates are a serious threat to the maritime world. 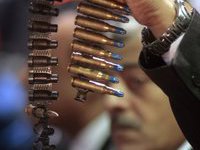 The Foreign Ministry of Ukraine reported the release of three citizens of Ukraine captured by pirates off the coast of Nigeria. The fate of other sailors who were on the ship Armada Tuah hijacked in Nigeria was not reported by the Ukrainian Foreign Ministry.

On February 17th, 2013 vessel Armada Tuah under the flag of Malaysia was seized by Nigerian pirates. In addition to the three Ukrainians there was one Russian and two citizens of India on board. The attack occurred about 70 km off the coast of Nigeria, near oil-rich Bayelsa State. Over the last ten days this is the fourth case of piracy in the region.

Rebel group MEND - "Movement for the Emancipation of the Niger" operates in the oil-rich Niger Delta. Its militants attack government oil industry objects and kidnap foreigners who work in the oil industry to demand ransom. Such crimes could be committed by representatives of this organization.

Off the coast of Nigeria and Cameroon there are also pirates robbing civilian ships and kidnapping people. Alexander Polyakov, Russian Ambassador to the African country, described MEND as a group that represents a "complex mixture of different groups - from ideological fighters for the emancipation of the Niger Delta to the bandits involved in kidnapping."

The UN Security Council has long been concerned with the problem of piracy in the Gulf of Guinea. On the east coast of Africa there are small groups of armed Nigerians. The local authorities are unable to control the situation and are not even trying particularly hard, said Dmitry Bondarenko, deputy director of the Institute of African Studies:

"The situation in Nigeria is very complicated. It's Government has a lot of different challenges, first and foremost, political, linked to Islamist groups and the strike movement in the country. In addition, such groups of bandits are poorly monitored and tracked. Government is unable to effectively combat piracy."

In recent years the Gulf of Guinea, controlled by Nigerian pirates, has become a hot point in shipping. According to Alexander Bodnya, deputy chairman of the Russian Union of Sailors, Nigerians pirates in most cases do not capture ships for ransom, as do the Somali pirates, but rob the crew and cargo. Sailors are often subjected to abuse in such cases. The damage to the global economy from maritime piracy according to various estimates amounts to $12.7 billion dollars a year. According to the International Maritime Bureau, in nine months of 2012 pirates killed at least six sailors, 448 were taken hostage, 125 vessels were boarded, 26 fired upon and 24 hijacked. These numbers suggest that a complete eradication of piracy is still very far away.

What are the ways to defend against modern pirates who, using fast boats, are able to operate thousands of kilometers away from the coast of Africa, covering most of the trade routes? If the pirates are treated humanely (that is, given to the authorities of their native countries and not killed), then a war with them will be endless, and it will still be lost. Therefore, one thing remains - to punish them to the full extent.

There is empirical evidence that pirates can be defeated quickly and efficiently. When pirates of Roman times in the Mediterranean began to openly threaten shipping, Pompey destroyed them with an onslaught. After that the life in the Empire was quiet in this regard. This was done because in Rome in extreme conditions a specially designated person was given special powers until the danger was eliminated. Enemies, pirates, and bandits could be destroyed by any means, despite the legislation that would be reenacted as soon as the danger was over.

Many experts believe that the absolute ruthlessness towards gangsters who break the law could once and for all end with the pirates. However, the U.S. and many European countries require the international community to respect the rights of pirates and try them in the traditional court instead of immediate elimination. However, this humane approach for many years has not been able to stop the problem of maritime piracy.

No country can confront maritime piracy alone. It is understood by all, and many countries cooperate with each other in this area. The first regional intergovernmental agreement designed to promote cooperation in the fight against piracy involves 14 participating Asian countries. As part of the Agreement Singapore earned the status of the Center for the exchange of information between Brunei, Bangladesh, Cambodia, India, China, Japan, Myanmar, Laos, Philippines, Singapore, South Korea, Sri Lanka, Vietnam and

The Centre issues monthly reports on piracy incidents in Asia. As a result, due to joint patrols of waters the number of incidents of piracy in Asia decreased by 26%.

Many countries help each other fight against piracy. The French commandos in April of 2009 held the first military operation to free thirty hostages at the Somali coast. Fearing information leaks, soldiers of the Special Forces did not ask local authorities for permission to "invade." The operation was successful, six pirates were captured, and commandos and the hostages were not harmed.

Russia has something to brag about as well. In the spring of 2010 the unit of Russian Marines from "Marshal Shaposhnikov" ship planted from a helicopter and motor boats freed "Moscow University" ship captured by pirates. However, liberation of captured ships is not as important as prevention of their capture. Therefore, in the Horn of Africa there are military patrol ships of France, Spain, Germany, Italy, the Netherlands, Britain and other countries. Aircraft of various countries are actively patrolling the area as well. Such measures slightly deter pirates.

Many ship owners take all possible measures to combat piracy. Private security firms that provide armed guards on board the vessel or convoy ships are in high demand.

Many foreign ship owners also use various technological tools in the fight against pirates. They equip their ships with modern passive protection devices such as acoustic cannons. This device produces a high-pitched sound at high frequency. The volume of the sound produced by the device is 150 decibels, and as a result, a pirate gets a painful shock.

A microwave gun that makes a person's cell fluid boil is considered a more effective weapon. Various international companies are developing special navigation and tracking equipment that can be installed on a regular boat. After such "modernization" the boat will be a real spy ship virtually immune to pirates. "Spy ships" are controlled via a computer.

These methods allow some level of protection for ships, but do not solve the problem of piracy in general. The obvious question is whether resorting to the methods of ancient Rome would be more effective.