The official Syrian news agency, SANA, was blocked for almost two months by the western ex-imperialists in their last attempt to falsify the news about Syria, grasping at the last straw that is swimming away in the tide of events.

Recently, SANA came online again and can be read in five languages - Arabic, English, French, Russian and Turkish - on the internet. This shows that Syria is a cultured nation, with a long tradition of knowledge and learning. Most educated Syrians are not only bi-lingual, but multi-lingual. 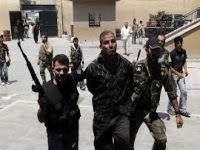 It is very interesting to see how different the SANA news is from those that we are bombarded with on a daily basis by the western mainstream media. "Army inflicts heavy losses upon terrorists in several areas," was the top headline of the English edition on Tuesday, the 22nd of January 2013.

The interested reader will find a lot of details, either pleasant or unpleasant to read, depending on the side he stands on. According to SANA, the Syrian Armed Forces inflicted heavy losses upon diverse terrorist groups in Syria.

Terrorists were chased and killed in Darya, Damascus countryside. Several of their leaders were shot: Omran Moaddamani, Sameer abo Mohammed, Ahmed with the nickname of abo Muhajed and Ghiath aka abo Kazem.

Furthermore, the Syrian Armed Forces foiled terrorists' attempts to detonate two explosive devices weighing 40 kilos, which were planted near the Syrian Television facility. The Syrian Army also destroyed five vehicles in Palmyra, killing all of the terrorists inside. More terrorists were pursued and killed in the Homs countryside, especially in the area of Ebl, al-Haidariyeh, al-Howeida, al-Gharbiyeh and Um al-Sakher.

Some of the terrorists had the glorious idea of dressing up, maybe because carnival time is approaching in the west. They looted houses, disguised as Syrian Army soldiers, but the Syrian Security Forces outsmarted and arrested them. All the stolen gold, money and weapons were seized.

The Syrian Defence Minister, General Fahd Jassem al-Frej, stressed that the Syrian Arab Army will continue to pursue and kill armed terrorists in order to foil the western conspiracy against the Arab Socialist Republic of Syria and its President, Dr. Bashar Al-Assad. On an inspection tour of Syrian combat formations, the General praised the high morale of the Syrian soldiers, who are bravely confronting the rag-tag terrorist hordes.

Meanwhile, the civilians in Syria are doing their best to carry on with their daily lives. Temporary shelter centres have been set up for displaced children. To entertain them, an event called "Holiday of Joy and Creation" took place from the 20th to 24th of January, with artistic and musical workshops. The Syrian actress, Huda al-Sha'arawi, narrated popular damascene stories. The youngsters also enjoyed watching magic box and theatrical shows.

According to Syria's Minister of Culture, Lubana Mshaweh, the Directorate of Child Culture is making great efforts to offer a wide variety of entertainment for the children in temporary shelter centres.

They also receive psychological support to cope with the trauma of having lost their homes and families. The needs for the temporary shelter centres are provided by charities, the civil community and humanitarian organizations.

The Syrian Minister of Culture furthermore inaugurated a new museum in Damascus. A prominent family donated their house, which was transformed into the Museum of Heritage Revival. The family of the scholar Said al-Arfi wanted to immortalize his memory with this project.

The house contains precious Syrian antiques and heritage pieces. The museum has been equipped with special rooms where children can read, study or take part in courses of calligraphy and wood carving.

The famous Syrian scholar, Said al-Arfi, was born in Deir Ezzor, in 1996. He worked as Mufti in the Euphrates Valley. In 1942, he became a member of the Arab Science Academy in Damascus. Said al-Arfi is the author of several books. During the inauguration ceremony, the volume, "Quotes from the Thinking of Scholar Mohammed Said al-Arfi" was signed.

Last, but not least, football is still being played in Syria. The Syrian football team was proud to move up eight places in the recent FIFA rankings, from the 144th to the 136th place, with 237 points. They are still very far away from the top ten, of course, but this was an important step forward for the Syrian football team after it benefited from winning the West Asian Championship.

However, things do not look so good for the so-called "Syrian opposition," as the Lebanese media, Al Manar, reported. Their meeting in Istanbul was postponed once more, and their plans of forming a "transitional government" in Syria were thwarted again. They seem to be on the transition to nirvana, or nowhere.

This medley of 70 heads, formed with western and Gulf backing in Qatar, is lost in power struggles. The self-anointed chief, Moaz Alkhatib, flew to Qatar to beg for more money. If the beggar comes back with empty hands, the rest of the beggars might get lost soon.

Sic transeunt tempora. As time goes by, the "transitional council" might transit to some other place and let the brave Syrians lead their lives in peace.