Venezuela remains a stronghold of Chavismo

Venezuela's Vice-President, Nicolás Maduro, who is leading the country while President Chávez is recuperating from his operation in Cuba, gave the latest report about the President's health in a statement on the 16th of January, published in the news media EFE:

"The Head of State, Hugo Chávez, has regained consciousness during his latest postoperative phase. The doctors are concentrating on treating his respiratory problems, which were alleviated already. President Chávez is getting better each day. He needs peace and tranquillity. Hugo Chávez is the elected President, whom the majority of Venezuelans voted for on the 7th of October, 2012. He will remain President for the period of 2013 to 2018." 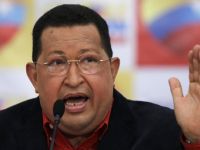 Nicolás Maduro had visited Hugo Chávez in La Havana on the 14th of January and spoken to the President personally, who gave him a signed order for the nomination of Elías Jaua as Venezuela's Minister of Foreign Affairs and a written report to be read at the National Assembly.

According to article 237 of Venezuela's Constitution, the President must give an account about his administrative, economic and social work of the previous year in a report to the National Assembly in January.

Paragraph 17 of Article 236 states that the Vice-President may read the report if the Head of State cannot do it personally. Venezuela's Supreme Court ruled that Vice-President Nicolás Maduro, backed up by the ministers, may present the yearly review in the National Assembly, which he did.

In spite of the Supreme Court's decision, the opposition walked out of the National Assembly in protest, while the private opposition media and the western mainstream press are attacking the Bolivarian Government viciously in yet another round of their numerous mean attacks, which seem to be coordinated by the ex-imperialists who are still trying to pull the world's strings in their desperate attempt to wield power.

Of course, they also attacked President Chávez' decision to nominate Elías Jaua as Foreign Minister. They even went as far as saying that a "dead man could not sign orders." The Venezuelan population is infuriated by the respectless "necrophilia" of the right wing.

Many pro-Chávez demonstrations were organized in Venezuela during these past weeks, where people showed their support and wished the President to get well. Masses in churches were held as well as healing rituals by various indigenous communities in different parts of the Venezuelan territory.

The nomination of Elías Jaua as Foreign Minister was published in the official Gazette as decree 9.351, signed by President Hugo Chávez. Elías Jaua, who has taken up his new function, reiterated that it is President Chávez who will take all major administrative, economic and political decisions in Venezuela, nobody else, certainly not the rag-tag right wing opposition on the ex-imperialists' payroll.

"The President of the Republic is the person who names and removes ministers, nobody else has the power to do it," Elías Jaua confirmed in an interview with the Columbian radio station, Blu Radio. He also admonished the right wing opposition to refrain from "creating unrest and incertitude."

The Foreign Minister thanked Roy Chaderton, Venezuela's Ambassador at the Organisation of American States (OAS), for his support of the Bolivarian Government in front of this institution.

Professor Elías Jaua, who taught sociology at a university in Caracas, before President Hugo Chávez invited him to join his team of ministers, recently wrote an interesting essay on "Chavismo," summing up the historical development of this movement and defining its main aspects.

The essay starts with the decade of the 1990s in Venezuela, when Comandante Chávez brought people together of various sectors of society, to rescue the Liberator Simón Bolívar's ideals of freedom from neo-colonial, imperialist chains.

Farmers and fishermen, students and professors, miners and workers, women, afro-descendents and indigenous people heard his call and followed Hugo Chávez and his circle, who managed to hold a Constituent Assembly in 1998, in order to recover national sovereignty from foreign domination.

The following years brought some upheaval. What was at the top went down; what was at the bottom rose upwards. In other words, the classes of industrialists and big landowners were disowned, as gradually the poorest and formerly excluded sectors of society gained power.

After his election as President in 1999, Hugo Chávez and his administration began to reshape the economic and social structures of the country through new legislation passed by the National Assembly.

The term "Chavista" first appeared in the 1990s, Elías Jaua knows. Originally it was used as a derisive term ("Chavista hordes"), but today it has become an honourable denomination. Chavistas are proud to belong to this movement.

The Chavistas won the battle against the coup mongers in 2002, who tried in vain to roll history back to a pre-1998 status quo. When President Hugo Chávez was ratified in 2004, the fascists finally lost. They have been growling in their pits like mad dogs ever since.

Professor Elías Jaua explains that being Chavista means feeling a strong connection towards a leader who did not betray the masses, but helped them in their plight. Being Chavista furthermore means the knowledge that power belongs to the people, not a few self-chosen elites.

In addition, being Chavista means to honour Venezuela's cultural and social diversity, holding up human solidarity and a strong ethical belief in life as the highest values. Last, but not least, being Chavista means supporting the union of Latin America, according to the ideas of the Liberator Simón Bolívar. Professor Elías Jaua defines Chavismo as a Latin American leftist liberation movement with Christian, socialist and indigenous roots.

At the end of his essay, the Venezuelan Minister of Foreign Affairs emphasizes, "We are Chavismo, a joyful and revolutionary force for liberation. Happy New Year 2013, it will be a year of great challenges for Venezuela. We will live and we will win!"

Happy New Year 2013 also to all those people in the world who are supporting Chavismo and see this movement as a worthy alternative, an example to follow, because it might offer a solution for their own economic, political and social problems. May they all live and win!