Brotherhood of drivers buried in Russia

Traditionally, winter comes to Russia at the time when no one expects it. This year, the beginning of winter has turned, quite literally, into a humanitarian catastrophe, although there were seemingly no casualties. The notorious Russian federal highway M-10 was paralyzed on Friday, November 30. The traffic jam that appeared because of ice and snow stretched for 191 kilometers. The snow trapped hundreds of vehicles on the road for several days. 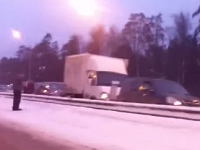 The new Minister for Emergency Situations, Vladimir Puchkov, for whom the situation on the M-10 became his first major test, demonstrated miracles of endurance, constantly going on the air with comments. Unfortunately, the measures taken for the rapid disappearance of the unbelievable traffic jam were not enough.

Alas, this snow hysteria is not going to be the last one in Russia - the winter has just started. Forecasters say that this winter can be the coldest one during the past 20 years.

A Pravda.Ru correspondent talked to a long-distance truck driver, manager and forwarder of a transport company of St. Petersburg, Vazgen Hablakyan. The man has spent two and a half days alone in a huge MAN truck with five tons of household appliances on board. Here is what he told us after he recovered from the depressive experience:

"When stuck in the traffic jam, I did not see any food stations on the road. There were no refueling stations or heating trailers either. Some fellow truckers say that there were such. We exchanged food with our drivers in the jam, we climbed into each other's cabins to get warm one after another. If a stopped engine cooled down and could not start again, we helped each other too. But this brotherhood of drivers was only five vehicles ahead and five back. The rest looked at each other as enemies or competitors.

"I did not see any rescuers either, but there were traffic police inspectors. To be honest, I felt sorry for them. They were wearing warm uniform, but they had to walk through the blizzard and snow piles, they had to travel on foot, with great difficulty. I remember two officers were passing by the column - they did not even ask for documents, they didn't inspect anything. They would only ask what we needed, put that down and keep walking through a blizzard on. However, I didn't see any help coming.

"There were a lot of stupid situations. SUVs would move across the road that has just been cleaned of snow, small cars would rush after the offroad vehicle. No one would let a heavy truck move - they didn't let us hook into the stream. Some of the passenger cars that left me behind I later saw stuck in the snow on sidelines.

"In general, the conclusion that I made after this ordeal on the M-10 was as follows. The drivers' brotherhood was buried. There is little respect for each other on the road, every man is for himself in a difficult situation. As for long distance drivers, it is a bit better - they can share fuel and help each other the way they can."

Here is what a rescuer of the Russian EMERCOM, Vadim Sergeyev, told Pravda.Ru:

"I happened to clear snowdrifts near Torzhok for two days, which is near the M-10. What struck me most was the fact that drivers were only hoping for help from outside - rescuers saw little real help from them.

"Our snow-removing vehicle ran out of fuel and no one gave us anything, not even for money. I would not say that all of our drivers are indifferent, though. But I saw many of such drivers on the M-10.

"We were once clearing the snow after an avalanche on a mountain road in Kabardino-Balkaria. It seemed to me that literally every single driver rushed to help rescuers, so we did the work quickly. Unfortunately, I only had the feeling of disappointment after our work on the M-10. Everyone was swearing at us as if it was rescuers who made the snow."