Assad's government began an active search of support in Latin America, and not by accident. Due to the almost unanimous support of the countries of the region, Palestine significantly advanced in recognition of its sovereignty. However, the Syrians did not impose themselves. They first received a signal from the countries of the Bolivarian Alliance for the Peoples of America (ALBA).

In October of 2011, the delegation of the ALBA countries visited Damascus. The delegation included Venezuelan Foreign Minister Nicolas Maduro, Cuban Foreign Minister Bruno Rodriguez, Deputy Minister of Foreign Affairs of Venezuela Pablo Villagomes, Ambassador of Nicaragua to the United Nations Maria Rubiales and Communications Minister of Bolivia, Ivan CANELAS. Then Maduro promised that the countries of the bloc would not sit idly and support Syria in all international organizations, starting with the UN. 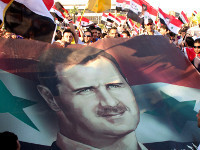 In late November, Vice-President of Syria Faisal al-Mekdad visited Cuba, Nicaragua, Venezuela and Ecuador. The visits were barely covered by the Western media. The reason is not only an attempt to isolate the current legitimate government of Bashar al-Assad, but also to prevent a repetition of the situation with the Palestinians. The recognition of the independence of Palestine by Latin American countries in 2010-2011, including Brazil and Argentina, has led to the fact that this issue is now on the agenda of the UN.

Such activation of Syria indicates that Assad is far from being on the verge of falling. First of all, he is interested in such a practical matter as the country's fuel supply. In addition, he needs to organize a diplomatic offensive to ensure that as many countries as possible do not recognize the newly formed pro-Western National Coalition for Syrian Revolutionary and Opposition Forces. And, of course, political and ideological solidarity is very important, and he secured it.

For example, Cuban Foreign Minister Bruno Rodriguez after his meeting with al-Mekdad said that his country would continue to support the Syrian nation in its resistance to external pressures, especially represented by Western media. In Nicaragua, the advisor for international affairs of President Daniel Ortega, Miguel d'Escoto, who represents the country in the United Nations, expressed his country's optimism with regard to unequivocal victory of Syria supported by the countries protecting the freedom and independence, SANA reported. In Ecuador, Foreign Minister Ricardo Patiño after a meeting with Mekdad said that the western countries will not be able to repeat the Libyan scenario in Syria.

Particularly valuable for Assad is the support of Venezuelan leadership. Mekdad arrived in the country on the day of the departure of Hugo Chavez to Cuba for medical treatment, and the private meeting was not held. But Chavez has repeatedly stressed that the government believed that Assad was the only legitimate representative of the people of Syria, and that Assad was a 'socialist leader.' "Why wouldn't I support the government of Bashar al-Assad, when he is the legitimate authority in Syria, why would I not support him? Whom would we support, the terrorists? Those, who call themselves the    "Transitional Council" and do nothing but kill people? I don't understand how some governments in Europe who think they are serious people accepted these terrorists and met with them," said Chavez after his re-election in October.

Mekdad said that he held a series of meetings in Venezuela, without disclosing names. Perhaps, the conversation was about a new supply of diesel fuel to Syria. Venezuelan President has already sent three tankers of fuel into the country despite the sanctions of the U.S. and European Union. This is a real help that can give the Syrian government confidence. "They asked for 600,000 barrels of diesel fuel, and we sent them two batches 300,000 barrels each," said in March Venezuelan Oil Minister Rafael Ramirez.

"If they ask again, we will help again," Ramirez said. He fulfilled his promise by sending a third batch of fuel a month later. The Minister then said that Venezuela was a sovereign state that signed numerous agreements with Syria, and all of them will be executed.

The Syrian representative brought a written message from Assad to the leaders of ALBA countries. Perhaps it contains a request for help in restoring working relationships with other Latin American countries. For example, Maruja Tarre from the International University of Simon Bolivar (Venezuela) said that the Syrian representative sought not only the support of Chavez, but also the support of the leaders of Brazil and Argentina, where a significant number of Syrians resided, the BBC reported.

So far these countries take the position close to that of Russia, laying the blame for many deaths on both sides and not supporting any foreign interference in the internal affairs of Syria. But President Dilma Rousseff said during her visit to Cuba that one cannot conduct political and ideological war under the banner of the struggle for people's rights. She said that the world must understand that there comes a point when all countries must take responsibility. The prospects for negotiations are in sight. The more so that Brazil has experience of confrontation with the West, at least on the Iranian nuclear program.