Israel remains the only obstacle as it refuses to talk or attend conference...

The spokesman of the Ministry of Foreign Affairs of the Islamic Republic of Iran, Ramin Mehmanparast, lamented on Tuesday (27th) to U.S. opposition to the realization of a Conference on a Middle East Free of Nuclear Weapons in December.

"This measure represents the illusory claims, contradictions and ambivalent attitudes of the United States under the concept of nuclear disarmament and the establishment of international security," the official said.

In allusion to Iran's initiative to create a Middle East free of atomic weapons, the Persian official emphasized the importance of full and effective implementation, without preconditions articles of resolution 1995 regarding this issue.

The United States, according to a spokesman for Iran's Foreign Ministry, is against this conference and confessed that it aims to "prevent the isolation" of the fake Israeli regime.

The member states of the Nuclear Non-Proliferation Treaty (NPT) agreed to conclude the conference in 2012, recalled Mehmanparast, at that time in reference to the nuclear arsenals that the Tel Aviv regime has and how they repudiate accession to the treaty, as the only obstacles that exist for a Middle East free of nuclear weapons.

After repudiating any preconditions for concluding the conference, the spokesman of the ministry pointed out the need to press the Israeli regime to dismantle their arsenals and join the NPT.

The Tel Aviv regime has rejected all international nuclear regulators, in particular the NPT, and prevents UN agencies oversee its nuclear facilities.

However, the Israeli regime has repeatedly threatened the Iranian nation with a military attack in a bid to force the Persian country to put an end to its peaceful nuclear energy program which, the Tel Avivregime claims, "has nuclear goals."

Iran has always rejected such accusations, noting that, as a signatory to the NPT and as a committed member of the International Atomic Energy Agency (IAEA), it is entitled to use technology for peaceful purposes. 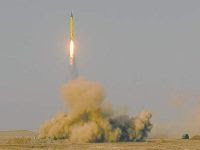