Israel prepares for war with Syria just in case

The echo of the Syrian War has reached Israel. Last week in Syria shells aimed at the Golan Heights were shot by mistake. Fortunately, no one was hurt, and the parties agreed that the incident was closed. However, the Israeli government has initiated IDF exercises in case of a war with its northern neighbor, and the security services are checking the shelters in major cities. 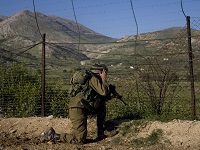 Most analysts do not doubt that in case of a war with Iran or Syria, "Hezbollah" will initiate massive rocket attacks on Israel, as it happened during the Second Lebanon War. During the exercise, 240 shelters have been tested in Tel Aviv. In the event of an attack, it was decided to use underground parking as a shelter.

Earlier, the Shiite terrorist organization Hezbollah has confirmed its readiness for a war with Israel. Maneuvers involving 10,000 militants groups were held in southern Lebanon in late August of 2012. The training of Hezbollah that lasted three days looked like the maneuvers of the real army. The elite units of the terrorist organization took part in the trainings. "During the maneuvers we tested not only combat capability, but the ability to defend the strategically important villages. The training assumed the ability to capture parts of the Upper Galilee in Israel. In the past Nasrallah has urged to prepare for this moment," said Cursor referring to the Lebanese newspaper Al-Jumhuriya. On October 2, Hezbollah reiterated the statement by publishing on the Internet the map of the capture of Upper Galilee. However, the Lebanese extremists do not have the experience for an offensive war, and in many ways are inferior to the IDF. Such threats are part of the propaganda campaign aimed at strengthening the position of "Hezbollah" in the region.

Meanwhile, the Syrian leadership continues to insist on the return of the Golan Heights occupied in 1967. A few months before the outbreak of the civil war in Syria, President Bashar al-Assad said that if necessary, the Golan Heights will be returned by force. Another question is whether Damascus is interested in starting a new war, now that the internal conflict with the rebels is at its peak. However, on September 19, 2012 the IDF Chief of Staff Benny Gantz ordered emergency military exercises in the Golan Heights to test the level of preparedness of the IDF on the Syrian-Israeli border.

Recently border incidents have been occurring here with alarming frequency. On September 26, a Syrian missile exploded in the Golan Heights. A day earlier, an unknown fired at the border area. On October 3, IDF patrol discovered a detachment of the armed Syrians who approached the border. After the incident it was decided to evacuate tourists from Mount Hermon.

Anyway, Israel, unlike Turkey, remains neutral and refrains from military action, even in cases where the rockets and missiles fall on its territory. Another question is how long it will be possible to maintain the fragile peace in the north. Israel and Syria have been at war since 1967 (the peace talks have started in 2000). The confrontation between the two countries has been transferred into Lebanon and the Gaza Strip, where the militant groups loyal to Damascus are located. The IDF responded to the attack by the Air Force bombing, whose victims are often civilians.

Meanwhile, the official Damascus spoke at the 67th session of the UN General Assembly with a harsh criticism of Tel Aviv. Head of the Syrian Foreign Minister Walid Mualem said that in order to make the Middle East a zone free from weapons of mass destruction, Israel must be forced to give up its nuclear weapons. Israeli government officially denies military component of its nuclear program.

However, experts note that the country could get a nuclear bomb with the help of the United States. No wonder Golda Meir once said: "Israel does not have nuclear weapons, but if we have to, we will use it". Today, the country has a single nuclear power plant in Dimona built in 1964, which may soon be closed due to rising tensions in the region.

The Netanyahu government has repeatedly threatened tough measures against Iran and Syria, supporting violent militias in Lebanon and the Gaza Strip. At the same time, Tehran and Damascus are taking additional steps to strengthen their alliance. Two months ago, Syria and Iran signed a secret agreement, according to which Assad has pledged to go to war against Israel in the event of an attack on Iran by the latter. However, a similar agreement was signed by the parties in 2008. The Islamic Republic of Iran, under the agreement, committed to provide the necessary assistance to the regime of Bashar al-Assad, Zman.com reminded.