USA orchestrates another portion of riots in Kyrgyzstan

The situation in Kyrgyzstan is getting tense again: the supporters of the nationalization of the largest gold deposit "Kumtor" took to the streets of Bishkek and tried to storm the governmental building. Ten people were injured in the clashes. Three opposition leaders were arrested on suspicion of trying to overthrow the government. 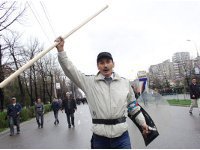 On 3 October, in Bishkek, advocates of the nationalization of large gold deposit "Kumtor" held a rally. The protesters attempted to break into the government building. Kamchybek Tashiev, the leader of the Ata-Jurt faction, called to seize power, officials with the Interior Ministry said. If Genghis Khan once managed to seize power with the help of only 30 people, then we will be able to capture the government building with the support of 100 people, Tashiev said. Over a thousand people took part in the rally - a third of them were trying to break into the parliament building. The protesters also demanded the extradition of former Kyrgyz President Akayev. As a result, ten people suffered in the storm, three people received gunshot wounds.

As the Minister for Internal Affairs said, there were only stun grenades and teargas used. "Two men and a woman were hospitalized with gunshot wounds," said Elena Bayalinova, a consultant of the press center of Ministry for Health of the country. According to preliminary data, there were several shots fired from the crowd of protesters, several police officers were injured. Criminal cases were filed against opposition deputies of Ata-Jurt faction Talent Mamytova, Kamchybek Tashiyev and Sadyr Zhaparov for their calls to the overthrow the existing order and seize power.

Kyrgyz opposition intends to go on another rally to protest against the arrest of their leaders. Mass demonstrations are planned to take place in Bishkek, Karakol, the Issyk-Kul region and in the southern regional centers of Osh, Jalalabad and Batken. Opposition activists promised that the actions would be exclusively peaceful and that no violent actions against the government would be taken.

In recent years, Kyrgyzstan lives in constant conflict between the clans of the north and the south of the country. The first coup took place in March 2005. Those events were called the "Tulip Revolution." They led to the overthrow of President Askar Akayev and to Kurmanbek Bakiyev's rise to power. Askar Akayev left the country with his family and took refuge in Russia, where he lives today. The power was given in the hands of diverse opposition. Conflicts among the winners of the revolution occurred soon afterwards. Bakiyev and Kulov continued to struggle for power and Bakiyev eventually won. It did not improve either the general economic condition of the country, or the position of ordinary people.

The second revolution took place in April 2010. Anti-government protests spread throughout Kyrgyzstan. The causes of unrest were: extremely low standard of living, the impotence of the authorities in solving social and economic problems of the republic, and the ongoing struggle for power between the Kyrgyz clans from the south and the north of the country.

Mass demonstrations took place across the whole country; the authorities violently dispersed them. Thousands of civilians were killed. The situation in the country has not improved. Experts believe that another revolution in the country is about to happen.

Russia is concerned about the situation in Kyrgyzstan. The Russian Foreign Ministry said that all such issues should be resolved exclusively in the legal field, without putting military pressure on the authorities. In connection with the riots, Russia has taken necessary measures to ensure the safety of Russian citizens in Bishkek.

Kyrgyzstan is an important strategic partner for Russia. RAO UES and Gazprom conduct the largest projects in the country. Kyrgyzstan and Russia co-manage the Kara-Baltinsky plant, which extracts uranium-containing ores, as well as molybdenum, thorium, silver and gold. Russia's Kant airbase is deployed in Kyrgyzstan too. In late September, Vladimir Putin visited the country. Putin forgave Bishkek almost half a billion dollars of debt and promised to invest additional funds in the country.

Russia wants to regain its influence in the region. Russia and Kyrgyzstan are going to build and jointly operate several hydroelectric power stations. Therefore, it is very important for Russia that the economic and political situation remains stable in Kyrgyzstan. This will allow the two countries to implement their programs, and Kyrgyzstan will be able to raise the standard of living for its people. It is Russian investments that can help the country.

It is possible that the interests of the United States have something to do with the unrest in Kyrgyzstan. The United States and Uzbekistan dislike Kyrgyzstan's steps towards Russia. They can be behind the recent riots. The Kyrgyz opposition may not even realize that they have such significant players behind their backs.

Judging by the actions of protesters, they had been prepared to storm the parliament. "Kumtor" - the gold deposit - was just a cover. The goal of the protesters was to destabilize the situation in the country. The meetings were organized well. If the opposition wins the support of the people in the south, the U.S. and Uzbekistan will have a full "moral" right to intervene.

Why does America need this small country? There is a US air base in Kyrgyzstan - Manas. Since 2009, it serves as a major transit point of the U.S. Army on the way to Afghanistan. Up to 2,500 soldiers stop at he base every day. In addition, air tankers Stratotanker that take off from Manas refuel American fighters in the Afghan skies. The fate of the airbase remains unclear.

Almazbek Atambayev, the current President of Kyrgyzstan, has repeatedly promised to eliminate the U.S. base and remove the U.S. military from the country to build a civilian international transport hub at Manas. Certainly, the U.S. authorities are not happy about such prospects. The Americans do everything possible to extend the presence of their soldiers in Kyrgyzstan. A Turkish company has recently won the tender for the construction of the aeronautical complex at Manas. In addition to the complex, the system will include 26 radar stations, to control the air space not only in Kyrgyzstan, but even China and Kazakhstan. This system may become a link in NATO's chain of the "southern" missile defense system. The current Kyrgyz president, who is friendly with Russia, is not good for the USA.