Turkey and Iran: Ahmadinejad and Davutoglu meet in New York

The President of the Islamic Republic of Iran, Mahmoud Ahmadinejad, met on Wednesday (26th), with the Foreign Minister of Turkey, Ahmet Davutoglu, in which the two sides discussed various issues related to the Muslim world.

Bilateral relations between the two countries, the conflict in Syria, the situation of Muslims in Myanmar (Burma), Somalia, Sudan and the problems faced in the world of Islam, were other issues discussed at the meeting.

The Turkish foreign minister, meanwhile, described the trilateral meeting of Iran, Egypt and Turkey, held recently in Cairo, and said the Syrian crisis is heading for a very important and positive step for the cessation of bloodshed in the Arab country.

The Iranian president, in addition to emphasizing that Iran seeks the cessation of violence in Syria, said the Persian country will continue to put all their efforts toward that objective.

At a parallel meeting of the 67th General Assembly of the United Nations (UN) in New York, Davutoglu gave a briefing on their information to the president of Iran on his last trip to Myanmar, the current situation in Somalia, and aid to regions in Turkey.

He also offered an explanation about his meetings with the foreign ministers of Sudan and South Sudan and the situation in the countries with the Iranian chief executive.

The 67th session of the UN General Assembly ends on October 01 in New York, USA, where world leaders address the most important international issues.

Vuk Jeremić was elected President of the sixty-seventh session of the United Nations General Assembly on 8 June 2012. At the time of his election, he was serving as Minister of Foreign Affairs of the Repubic of Serbia, an office he held starting on 15 May 2007. 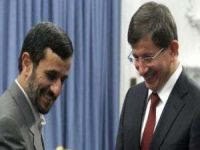