Ambassador Stevens and colleagues: Why "the sound of silence"?

An exceptionally meticulous piecing together of the events in Benghazi leading to the deaths of U.S. Ambassador Christopher Stevens, three colleagues and either seven or ten Libyan personnel, on the 11th of September, has been presented by Mark Robertson and Finian Cunningham, cutting through "fog", hypocrisies and misinformation. (i.)

The events in Benghazi have been presented as a spontaneous uprising caused by rage at the sewer level film, The Innocence of Muslims. However, quoting one of the surviving, but badly injured Libyan personnel, Robertson and Cunningham note his words:

"The Americans would have left if there had been protesters, but there wasn't a single 'anti.' The area was totally quiet until about 9:35 pm, when as many as 125 men attacked with machine guns, grenades, RPGs, and anti-aircraft weapons. They threw grenades into the villas, wounding me and knocking me down. Then they stormed through the facility's main gate, moving from villa to villa."

The article also points out that this was not an official US Consulate, but a bunch of rented dwellings with little reinforcement of doors and windows as would usually be the case. That soundly negates the claim that "U.S. sovereignty" was attacked, justifying in U.S. Administration eyes, as ever, more bombs from the air and "boots on the ground."

Paying tribute to Ambassador Stevens the day after his death (ii) Hillary Clinton, it has to be said, probably explained the reason for his murder to the world:  "In the early days of the Libyan revolution, I asked Chris to be our envoy to the rebel opposition. He arrived on a cargo ship in the port of Benghazi and began building our relationship with Libya's revolutionaries."

President Obama in tribute confirmed: "With characteristic skill ...  and resolve, he built partnerships with Libyan revolutionaries ... I think both Secretary Clinton and I relied deeply on his knowledge of the situation on the ground there. "  With hindsight, a tragic lack of judgement all round. And what happened to that Nobel Peace Prize?

The President concluded: "Today we mourn four more Americans who represent the very best of the United States of America." (iii)

Thus, with U.S. government backing, the Ambassador plotted with a bunch of insurgents and terrorists the overthrow of yet another sovereign government. "The world needs more Chris Stevens," said Madam Clinton. "He would be remembered as a hero by many nations ... in a noble and necessary" mission, she concluded.

Clearly, there are Libyans in their ruined country who do not see it quite that way. As Iraq, of course, they will be "dead enders," as Afghanistan "rogue elements. " And another illegal, ill judged, finally to be defeated, U.S. quagmire looms.

However, some questions. Assuming quotes from the survivor are correct, unprotected buildings, including that of those housing the Ambassador and American colleagues, were attacked with hand grenades, rocket propelled grenades and anti-aircraft weapons, then buildings were stormed and set ablaze.

Hand grenades blow bits off people, or blow them to bits depending on the distance of the body from the impact. RPGs destroy tanks, yet alone people, anti-aircraft weapons are designed to damage and bring down aircraft. It seems, however, the Ambassador did miraculously survive.  Some of the gruesome pictures appear to be authentic. What remained of the others?

Allowing for the chaos of the immediate aftermath of the attack, the varying accounts are multiple: the Ambassador was killed in the building; he was rescued and driven to hospital, the car shot through the window; he was rescued and carried on shoulders to hospital. On arrival he was breathing but suffering from severe smoke inhalation; he was already dead - much later later, he was noted to be covered in soot.

U.S. planes finally landed to collect the bodies. There seems to be no independent verification, no pictures to be found of this heroic rescue.. Four coffins were subsequently shown at Andrews Air Force Base, their arrival marked by a "solemn ceremony."

Then, near silence. the Ambassador, given the words of the President and his Secretary of State, was surely to be given a State funeral. His colleagues' passing also likely to be attended by Washington officials.

A search finally revealed that the funeral for Glen Doherty, the former Navy SEAL, turned contractor, was held in Winchester, Mass., on Wednesday, the 19th of September. There is no mention of any official Washington Presence. (iv)

The following day the funeral of his colleague, serving SEAL Tyrone Woods, was held in San Diego, with little national coverage. (v)

In a nation which lets its grief hang out as no other, oddly, daily searches find no funeral announcements for Ambassador Stevens or U.S. Air Force veteran Sean Smith, with ten years as an information management officer in what has been since 2009, Hillary Clinton's State Department.

It is also impossible to forget those pictures claimed to be of the unconscious or dead Ambassador being dragged through Benghazi.

With two deceased shrouded in silence, it is worth noting Germany's Der Algemeiner's coverage of the 16th of September: "The blogo-sphere is buzzing with a shocking unconfirmed report, originating from Lebanese based news website Tayyar, that Christopher Stevens, the US Ambassador to Libya was .... dragged through the streets before being murdered on the 11th of September."

The report (vi) originally cited the AFP news agency.  However, after AFP issued a denial saying, "That report falsely quoted our news agency," the website apologized, but said it still stands behind the report."

It is, in fact, more graphic and explicit, claiming the attack mirrored that on Colonel Quaddafi, whereabouts of whose remains have never been discovered.

It is still in the early days, but it is impossible not to reflect on stories recounted to this writer by Reginald Keys, who challenged Tony Blair in the 2005 UK election - who lost a son in Iraq, and of others bereaved, of coffins coming back to the UK encasing stones, not bodies or a single limb, which the grieving were asked to identify. Both the U.S. and U.K. have been found to have buried remains in land-fill, rather than return them to relatives. (e.g. vii)

If there are, as one bereaved American father stated of his son: "throw away soldiers," perhaps there are also "throw away" Ambassadors and their staff when things go wrong.

The U.S. Administration has also failed to acknowledge the Libyans they employed who died. When General Taguba was investigating the horrors of Abu Ghraib, he was told by an official that the murdered, tortured and abused, "were only Iraqis." Were these allies of Ambassador Stevens: "only Libyans"?

On the 14th of February 1979, he was kidnapped by four armed militia posing as police. He was held in room 117 of the Kabul Hotel (now the Kabul Serena Hotel.) All negotiations failed and he was killed in an exchange of gunfire hours later.

The wretched victims in Benghazi are of another U.S. folly. Ironically, Quaddafi's take over of Libya, which at the time of his murder had the highest standard of living in Africa, was bloodless. America's aspirations of democracy, liberation and freedom (read asset stripping) involves unending rivers of blood. Theirs and the decimated "liberated."

There are countless questions surrounding another terrible incident.

And lessons are never learned.

It has come to light this was deleted from Yahoo Answers:

Will there be a state funeral for Ambassador Stevens? Or does ... his question een deleted 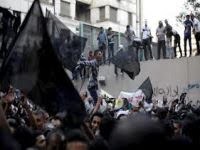