France's secular organization may undermine the country from within

France froze in anticipation of Muslim riots. They can break out both because of the controversial film "Innocence of Muslims," ​​and because of the new cartoons of the Prophet Mohammed in the local press. Incompatibility of the Western and traditional Muslim ways of life and thoughts once again find confirmation. 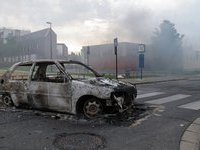 The situation in France has begun to heat up over the weekend. As in many other countries, local Muslims decided to express their anger towards the film "Innocence of Muslims" created in the U.S. However, the rally at the Place de la Concorde in Paris was unauthorized and resulted in the arrests of 152 people. The Prosecutor's Office opened a criminal case.

French Interior Minister Manuel Valls explained that among the demonstrators there were many people known for their commitment to radical Islam. He made it clear that he would not allow the emergence of women with covered faces in the streets and street prayers, for it is prohibited by law. He said that they had to fight any manifestation of hostility and hate speech.

The passions seemed to have subsided, but then more fuel was added to the fire by the French satirical weekly Charlie Hebdo. The cover of the September 19 issue displayed a Muslim in a wheelchair helped by an Orthodox Jew. Below there was the inscription "The Untouchables 2". This was meant as a parody for the movie "The Untouchables", where a black assistant was helping a disabled aristocrat.

However, the cover was just the beginning. Inside the magazine the reader found the naked Prophet Muhammad. However, the chief editor Stephan Charbonnier did not see anything reprehensible in this art. "Drawings shock those who want to be shocked by reading the newspaper that they never read," he explained.

"Our readers could see Muhammad in a wheelchair 20 years ago, long before the famous cartoons. Then these pictures will be used by the extremists because they have to use something. Then there will be a ban on portraying people, animals, and we'll have nothing to portray, we will be publishing a newspaper of 16 blank pages," said Charbonnier.

Even Prime Minister Jean-Marc Eyro who cannot be suspected of a special sympathy for Islam could not remain quiet. He issued a special statement condemning all forms of abuse and urged everyone to use common sense. Obviously, he had anti-American demonstrations in Islamic countries before his eyes. He did not want to aggravate the situation any further.

At the same time, the French authorities did not openly condemn the cartoons because of freedom of speech and freedom of conscience. However, some measures were taken. Another demonstration of Muslims in Paris scheduled for September 22 was banned, and a day earlier French Embassies were closed in 20 Islamic countries during the Friday prayer for the sake of safety.

Such precautions cannot be considered excessive. It seems that the French leaders are beginning to realize that their worldview and that of the particularly conservative Muslims, to say the least, are different. Moreover, the government of France and Muslim traditionalists have the opposite points of view, which makes the conflict simply inevitable.

Islam prohibits depicting Prophet Muhammad in general in any form, let alone naked. The attempts to circumvent this ban cause pogroms. Think back to the Muslim world pogroms of diplomatic missions of Denmark in 2006. This happened because of the fact that the Danish newspaper Jyllands Posten published the images of the prophet wrapped in explosives. Muslims felt offended, as in the case with the movie.

The French law prohibits insulting religious feelings but there is an inherent contradiction here. France is a strictly secular country. In some point in time it went through several religious wars between Catholics and Protestants, and eventually came to the conclusion that the church should be separated from the state. This country respects the freedom of conscience and freedom of speech. Everyone is free to speak about religion in any way they want. Everyone has their own idea about the line between freedom and insult.

The problem of France is in the fact that its territory has a population of about 5.5 million Muslims. For many years it was believed that they could be integrated into the French society. Yet, in reality it turned out more difficult. Many immigrants from Arab (and other) countries preferred to live under sharia, and not according to the custom of their ancestors. Islam for them is not just a religion, but a way of life that they cannot forgo, especially if this is required of them by the "unfaithful."

France, however, keeps insisting on its position. 60-million-strong country is not going to abandon its principles of a secular state. In 2004 there was a ban on the wearing of religious symbols in schools, and six years ago a penalty for wearing burqa in public was introduced. But restrictions alone will not solve the problem. Muslims who are not ready to integrate into the French society are too numerous.

In the fall of 2005, the "Arab" France snapped with riots and car arsons in the suburbs of Paris and other large cities. Demonstrations against restrictions on Islamic dress also took place. Immigrants from North Africa, stirred up by some radical imams, staged terrorist attacks. This means that the French authorities should keep an eye on the issue.

For hundreds of thousands of French Muslims anything that means a departure from the strict Sharia law is unacceptable. For France as a country, secularism and democracy are important things. These two rules are completely incompatible, which introduces a risk of collisions of the supporters of the two worldviews. France along with other Western countries can expect turmoil.

17:05
Mirror: Putin's warnings about Sarmat are not exaggerated
16:38
Russian Defense Ministry reveals where Ukrainian army suffers greatest losses
16:24
Relations between Russia and Japan tumble down to zero
16:02
Expert explains why Russia withdraws troops from Snake Island
15:58
DPR may not execute British mercenaries
15:55
ASOS in its latest update mocks Russians because of the sanctions
15:23
Finnish FM: Trust between Moscow and the EU will be restored
14:40
Inflation in Italy reached its highest level in 36 years in June
13:35
Spiegel: Germany demands Lithuania to lift the ban on transit to Kaliningrad
12:29
Henry Kissinger: There are three possible outcomes of the Ukraine crisis
World
Putin answers to Ukrainian's HIMARS with Sarmat and S-500