Who is guilty of innocence of Muslims?

Nowadays, only lazy people do not know how to turn a mediocre amateur film into a tool that incites ethnic and religious hatred globally. A strongly politicized part of the society is ready to accept any idiotic and provocative trick such as a "punk-prayer", or a low-budget film like the highly controversial "Innocence of Muslims." 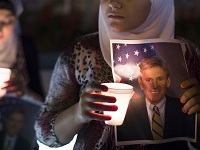 News reports about anti-American protests in the Arab world began to appear last week. The protests were caused by amateur film "Innocence of Muslims," which is generally referred to as a low-budget movie, because its budget was $5 million. The film has not been shown in full, but a 14-minute trailer of it was posted on YouTube. This video shows Prophet Muhammad in a bad image of a womanizer, pedophile and heartless killer. Moreover, the authors of the film alluded to his illegitimate origin. In some scenes Muhammad appears as a homosexual and a coward. He makes a donkey the first Muslim animal. After the September riots, the amateur actors, who took part in the shooting, claimed that the working title of the film was "Desert Warrior" and that some remarks were changed during the voice over.

On September 11, 2012 in Benghazi, Libya, a crowd broke into the U.S. embassy. Ambassador John Christopher Stevens and three embassy officials were killed in the attack. U.S. President Barack Obama ordered to strengthen the security of US embassies. Military-political Islamic organization Islamic Party of Afghanistan claimed responsibility for the suicide bombing near the airport of Kabul, in which 13 people were killed. A representative for the Islamists said that the attack was conducted in retaliation for the anti-Islamic film "Innocence of Muslims."

On September 15, Google refused to remove the video trailer for "Innocence of Muslims" from YouTube. Google officials stated that the trailer of the film "does not violate the terms of use." The company only limited access to the video in India and Indonesia, as it had previously blocked it in Egypt and Libya. The Internet giant stressed out that the restrictions had been imposed in accordance with local laws, rather than for political reasons. As of today, YouTube has been closed in Bangladesh and Pakistan. Russia's Prosecutor General's Office recognized "Innocence of Muslims" as an extremist film. Moreover, the Office warned Russian providers that the distribution of the film in Russia would be punishable in accordance with the Criminal Code.

Meanwhile, it became known that the scriptwriter and producer of the film is a 55-year-old U.S. citizen, Nakoula Basseley Nakoula, a Christian Coptic, disguised under the pseudonym Sam Bacile. Previously, this filmmaker had been convicted of fraud. In 2010, he was sentenced to 21 months in prison.

"This is a political, not a religious film" - Nakoula said last week in an interview with The Wall Street Journal. According to him, he was shooting the two-hour film for three months in California last year. About 60 actors and 45 crew were involved in the project.

Nakoula, who was arrested last week (after it was revealed that he was the author of the controversial film) for violation of probation, suddenly disappeared from his home. In Egypt, Salafi scholar Ahmed Fuad Ashush issued a fatwa with a death sentence to "Innocence of Muslims" filmmakers. The leader of the radical organization Jihad Group, which is closely associated with the leadership of Al-Qaeda, urged young Muslims to "do their duty and kill the director, producer, actors and everyone else, who was involved in the production and promotion of the film."

There are other voices heard. The chairman of the Liberal-Islamic Union of Germany Lamya Kaddor spoke strongly against the ban of the film. "The more they talk about the ban of the film and hurry to ban it, the more harm it causes," well-known German Islamic scholar and religious leader Lamya Kaddor said. The disputes on this controversial topic, in her view, can only add more fuel to the fire of Muslim phobia in Europe.

The film served as just another cause to incite hatred in the world. The real reasons are much deeper. One of them is the latest hobby of the United States to overthrow dictatorships, and the persistent promotion of the "Arab Spring" by the West. Politicians did not want to listen to warnings about the fatality of changing political figures. Now they can reap what they have sown.