Syria: Accounts of a dirty war

However great the wickedness of the media campaign, this cannot overshadow the truth of the ongoing war in Syria. A war instigated, orchestrated, conducted and financed from abroad, exacerbating the expression of the international class struggle . 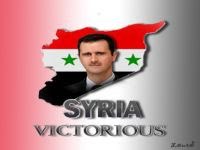 If it wasn't for the criminal actions of the  U.S.A. and the aligned NATO powers (who pontificate on the colonial revival the trio of Erdogan, Hollande and Cameron and fight for a greater role and higher profit), Israel and the petrodollar dictatorships of the Gulf, the current terrorist war against Syria would not be possible. This is the crucial element that overlaps the rest.

Not strange, because of the media's cloak of silence about the dominant character, driving forces and regional and international context of this war.  It is not possible to watch the bloody escalation or the framework of "civil war" in Syria without recalling the fresh trail of imperialist wars in Yugoslavia, Iraq, Afghanistan and Libya. In Afghanistan, the war drags on.

More than 2,000 soldiers from the United States only lost lives there. But after the inevitable withdrawal of the bulk of the NATO military presence, it was announced in 2014, that the U.S. intends to continue using the flammable focus of Afghan instability as a blackmail force to direct the borders of neighboring states, including the autonomous province of Xinjiang in China.

As we all know, Beijing is a major concern, already confirmed, of the USA. The sinister terrorist retroactive gear of Al-Qaeda (a culture cooked on the  stoves of the CIA in the 80s), the barbaric attacks with unmanned devices operated daily on the territory of Yemen, Pakistan, Somalia, etc., constitute an organic broth, not only the military's own projection of U.S. imperialism, as the forces that devastated Libya yesterday, today are still thrown into settling accounts in Syria. All in the name of freedom and democracy.

There we see the modus operandi of promoting religious extremism and the agitation of networks of swarming sects of radical Islam, the fratricidal fanning of ethnic-confessional division, as already darkly seen in the recent occupation of Iraq.  These cannon fodder forces serve a destabilizing agenda.  They simultaneously exhaust, allowing the ruling classes, and metropolises, to intensify the matrix of exploiting and managing social tensions and extended discontent to classes and intermediate sectors of the national bourgeoisie.

This is the scenario of fragmentation and destabilization sponsored by Washington for the region called the Greater Middle East, where interests intersect for control of the world economy and their geopolitical interests. A vision that is nonetheless symptomatic of imperialist megalomania in the limbo of the world capitalist crisis.

The war "without quarter" against Damascus, the obsession with overthrowing the "regime" of Bashar al-Assad does not forget for a minute the legacy of decades of post-colonial Syria.  Arab resistance is a bastion of anti-imperialist solidarity with the cause of Palestine. Trampling and burying the flag of patriotism and dignity that liberates Arabs, violating the sovereignty and territorial integrity of Syria, is a vital task for the attackers. The sovereignty of Iran emerges as an "obstacle" in the background (and one should remember the CIA coup that overthrew Mossadegh in 1952). But the propagation of the Syrian "conflict" goes further, beginning also to appear point to multinational Russia (see the recent terrorist attacks in the Caucasus and Tatarstan).

The incendiary mission led by the U.S. does not, however have hands free. The Syrian patriotic resistance is an example of courage and dignity, deserving of wider solidarity. And the meeting of the Non-Aligned nations recently held in Tehran, despite the contradictory elements it contained, is an important sign of hope for the people.