The "Arab Spring" may spread to the Palestinian Authority. The protests have been ongoing here since September, fueled by growth in poverty and unemployment. The financial system is in poor condition: the budget deficit has nearly reached the astronomical sum of $1 billion. Prime Minister Salam Fayyad has declared his readiness to resign. 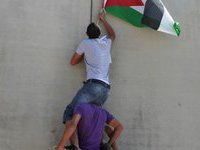 Today the entire world is watching to see how the PA once again is unsuccessfully trying to save the situation by cutting costs. Most of these reductions affected civil servants who have not been paid for months. In early September, it became known that the hiring of two thousand new employees was frozen. Meanwhile, unemployment has already reached a dangerous mark of 21 percent. Non-payment of wages and layoffs could not but affect the mood of the society. The result was not long in coming: in July mass protests were held on the West Bank of the Jordan River.

First demonstrations often had anti-Israeli character. Ordinary Palestinians are willing to protest against the occupation, treating Israel as the main source of their troubles. Recently, however, the demonstration has shown a pronounced social dimension. In early July, in Ramallah, hundreds of people took to the streets to express their discontent with the upcoming meeting between the leader of the Palestinian Authority Mahmoud Abbas and Israeli opposition head Shaul Mofaz. When police began dispersing the demonstrators, the crowd did not calm down. The authorities' actions caused a wave of spontaneous rallies in Ramallah.

At the time of the protest, the wages were not paid. In early fall, the discontent with the social and economic policies of the government agents has reached its peak. Taxi drivers were the first to wake up on September 6 and blocked the streets in several cities of the West Bank. The campaign was directed against the increase in petrol prices (as a result, the prices remained at a low level).

Rallies of taxi drivers were held in Ramallah, Nablus, Bethlehem and Hebron, and became the most prominent act of social protest in the autonomy. Trade unions and citizens supported the protesters. In Nablus, demonstrators burned tires, demanding the resignation of Prime Minister Salam Fayyad.

At the same time the leader of the Palestinian Authority, Mahmoud Abbas, in his speech at the Assembly of the League of Arab States in Cairo unexpectedly supported "Palestinian Spring", saying that the government will do everything possible in order to meet the legitimate demands of the people. On September 8, the representative of the Hamas leadership of Abu Mazruk spoke of the need to take steps to settle the social protests. In the current situation, Israel is interested in supporting the Palestinian Authority and assisting Fayyad who is currently in distress, said Abu Mazruk.

The split among the Palestinians that occurred after Hamas came to power in the Gaza Strip in 2007, did not contribute to the economic prosperity of the PA. At the same time, the Palestinians do not hide their disappointment at the indifference of the international community to the economic hardships of the autonomy. Either way, the situation in the Hamas-controlled Gaza Strip is not much better than in the West Bank and Gaza: there still the same poverty, unemployment, and lack of opportunities for young people. On September 3, 2012 there was a tragedy that led to the death of an unemployed resident of Gaza. Desperate to find a job, the young man doused himself with gasoline and arson. Sobbing, his father Sufian Abu Nada said that his family had to live on just $220 a month.

Starting in 2010, dozens of young people throughout the Middle East have committed acts of self-immolation to protest harsh social conditions. However, this is the first such case in the Hamas-controlled Gaza.

The echo of the "Arab Spring" has reached the Palestinian Authority only two years after the riots in Tunisia that ushered in the mass movement of social protest. In Israel, the discontent of the citizens spilled onto the streets in the summer of 2011. Democratically elected Israeli government had to come to terms with the continuing rally of the so-called "tent revolution." However, the leaders of the tent movement acted within the law, without questioning the very existence of the political system.

The situation in the Gaza Strip and the West Bank is more complicated than in Israel. It is here where the seeds sown by the "Arab Spring" may fall on fertile ground. Suffice it to say that up to 40 percent of the Palestinian population lives in poverty, and the unemployment rate among young people is one of the highest in the region. If the budget crisis is not overcome in the coming months, the government will be faced with a growing wave of discontent among ordinary Palestinians that can be fraught with unpredictable consequences. A few days ago Prime Minister of the PA Salam Fayyad has already indicated his willingness to step down if it is the will of the Palestinian people, stressing that his departure will not lead to the resolution of the protracted financial crisis.