Outrage: Why is the US surprised?

Let the killing of Ambassador Christopher Stevens in Benghazi be the diplomatic legacy of Hillary R. Clinton and let her surprise and bewilderment be a telling insight into her utter incompetence to do the job. To be a diplomat, you need emotional intelligence and that, unfortunately, Hillary Clinton does not have. 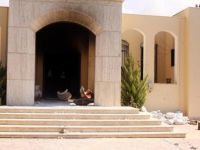 Just what exactly did the United States of America expect from their darling terrorists in Benghazi, the ones they "saved" after they armed them, trained them and prepared them to remove the Jamahiriya in Libya and replace it with the farcical "government" we see there today?

Just what exactly did the United States of America and their poodles in the FUKUS Axis expect from the bearded wonders of Benghazi, infamous for their terrorist exploits against NATO in Iraq and Afghanistan, after what they did in Libya, slicing the breasts off women, raping girls, torching homes, torturing people, murdering, looting and committing ethnic cleansing?

What are the human development indicators of Libya today? Compare them to the Libya under Gaddafi and see the result. The balance is the political legacy of Hillary Rodham Clinton, the death of Ambassador Stevens is her diplomatic legacy - a failure in both departments.

Furthermore, expressing surprise and stating that the USA helped "save" Benghazi shows how puerile and ill-prepared Hillary Clinton is. Did the Mujaheddin thank the USA for helping them destroy Afghanistan's only socially progressive government, the only one that upheld women's rights? Sure they did. 9/11 was the thank-you note.

And after the behaviour of the bearded wonders of Benghazi and their bloodthirsty acts against NATO soldiers, there went the USA and its FUKUS Axis poodles France and the UK supporting terrorists again and yet again they are appalled when the dog bites the hand that feeds it.

But then again, what to expect from someone like Hillary Rodham Clinton, who described her reception on a red carpet and with a band in Bosnia as getting out of an aircraft in a war zone? Does she have no idea that the terrorists the USA supports would do or say anything to get weapons and be placed in positions of power, then the latent hatred they have of the United States will come shining through.

Suffice it to say that in Benghazi, groups of youths were running through the US compound looking for "Americans" to kill. And after what Washington has done, after supporting Israel blindly as it bulldozes Arab homes and displaces Palestinian farmers by stealing their lands, as it treats the Bedouin as second class citizens, as it strafes schools in Gaza with phosphorous, only someone naïve, ill-prepared and totally incompetent would express surprise, especially when we see what we are dealing with in Benghazi.

A terrorist is a terrorist. Congratulations to Washington for yet again being bitten by the cockroaches it breeds.

That having been said, the death of every human being is a tragedy. The death of Ambassador Stevens, the other three Americans and the Libyans who lost their lives in this horrific incident must be condemned most vehemently, together with the deaths of the thousands of Libyan people the US-backed terrorists murdered, while Hillary Clinton was going on and on about "freedom". Freedom to be tortured?