Operating in Tunisia are 300 mercenaries of the Israeli intelligence service, Mossad, said Abdul Rauf al-Ayadi, head of the Loyalty to the Tunisian Revolution fraction, in an interview Wednesday with the Lebanese television station Al-Mayadeen.

Al-Ayadi, citing Tunisian security sources, added that the Mossad has established three centers on Tunisian territory in order to monitor the situation in Tunisia, Libya and Algeria.

After the revolution in Tunisia, the Mossad increased its activity in the country with the assistance of the Central Intelligence Agency (CIA).

Some political circles in Tunisia have not ruled out that foreign hands, including the Mossad, are behind the unrest in the country.

Hamma al-Hammami, general secretary of the Workers' Party of Tunisia, said that the Israeli regime prevents any action to create strategic coalitions with parties, thus frustrating the Tunisian revolution for the benefit of the Tel Aviv regime.

Also, the Israeli regime secretly moved the mortal remains of a rabbi of Tunisia to the occupied Palestinian territories.

The revolution began in Tunisia on the 17th of December, when a street vendor, 26-year-old Mohammed Bouazizi, set himself on fire in protest against administrative abuses and economic problems in the country.

Western media has referred to the Tunisian Revolution as the Jasmine Revolution, in tune with the color revolution scenario.  However, within the country this term is neither used nor recognized as such obviously. 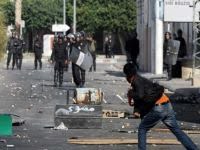