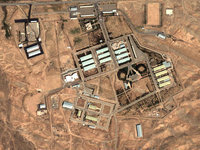 To keep "all options on the table" in the U.S. - Israel plans to change the incumbent Syrian and Iranian regimes and neutralize what both countries perceive as an imminent "threat" is a formula missing the only feasible option to defuse their perceived threat peacefully, which is obviously much cheaper in money and human souls.

On August 19, Israeli former head of the Operations Directorate of the Israeli military, Maj. Gen. (res.) Uri Saguy, wrote in Haaretz that late Israeli Prime Minister Yitzhak "Rabin strove to achieve agreements with our neighbors before the Iranians got a bomb. If we had peace accords today with the Arab countries and with the Palestinians, what exactly would the Iranians' conflict with us be about?"

Giving priority to making peace with Syria, Lebanon and the Palestinian people on the land - for - peace basis, which is the essence of the Arab Peace Initiative proposed by the 22 - member states of the Arab League in 2002, would disarm Iran of its Arab, Palestinian credentials and create a new regional environment that would in turn render any Arab alliance with Iran unnecessary and would uncover Iranian regional expansion as an endeavor sought per se by Tehran.

Instead, Israel is running away from peace making to warmongering, risking embroilment of the United States in a war on Iran that Washington does not want, at least for now.

Four-star chairman of the US Joint Chiefs of Staff Martin Dempsey said on August 19 that he has been conferring with his Israeli counterpart Benny Gantz on a regular "bi-weekly" basis and "we've admitted to each other that our clocks are turning at different rates." Israel's envoy to Washington, Michael Oren, acknowledged in a CNN interview the following day that Israel's clock was ticking faster than Washington's.

Iran's Supreme Leader Ayatollah Ali "Khamenei has not ["probably"] given orders to start building a [nuclear] weapon," according to Israeli defense minister Ehud Barak in a CNN interview on April 20; His Iranian counterpart Ahmad Vahidi this week dismissed Israeli warmongering as "psychological war;" General Martin Dempsey cautioned against an Israeli strike saying it would not destroy Iran's nuclear program; President Shimon Peres last week joined senior security, military and political experts to warn against a unilateral Israeli strike not coordinated with the U.S.

In the RAND Review for spring this year, Ambassador James Dobbins, who directs RAND's international security and defense policy center, and three expert analysts argued that "an Israeli or American attack on Iranian nuclear facilities would make it more, not less, likely that the Iranian regime would decide to produce and deploy nuclear weapons. Such an attack would also make it more, not less, difficult to contain Iranian influence."

Israeli warmongering is creating, in Saguy's words, an "orchestrated and purposely timed hysteria" in Israel as if "someone is lighting a fire, then yelling that it has to put out."

Financial markets are shivering, foreign investors are on guard, Israeli new shekel is growing increasingly weaker against the dollar and Pnina Grinbaum, a 55-year-old government clerk in Jerusalem, was quoted by the Associated Press on August 16 as saying: "I'm very afraid. I want peace, not war."

The international stand - off on Iran's nuclear program as well as on the Syrian crisis is very tightly linked to the impasse, which saw the Arab and Palestinian - Israeli peace process reach a dead end.

The Syrian crisis in particular is more closely tied to the impasse in the Arab - Israeli conflict. De-linked from this conflict, it would boil down to an internal crisis that could be easily solved by Syrians themselves.

To this end, Israel and U.S. are now doing all what they can to break the alliance between Iran and Syria and the Syrian bridge linking Iran to Lebanese and Palestinian movements resisting Israeli military occupation, thus cutting off Iran from the Mediterranean, as well as depriving these movements from their Syrian support, by coordinating a 'regime change" in Damascus.

For four years since Benyamin Netanyahu came to power, Israel risked a confrontation with the U.S. administration of President Barak Obama over his order of priorities in the Middle East, which gave precedence to reaching a negotiated political settlement for the Palestinian - Israeli conflict as a precondition to building up a U.S., Arab and Israeli front against Iran.

Netanyahu advocated a reversed order of priorities and has succeeded in pushing the Palestinian - Israeli conflict down from the top of U.S. regional agenda in favor of solving the U.S. - Israeli Iranian debacle first.

This rearrangement of Israel - U.S. priorities has marginalized the Arab - Israeli "peace process" to the extent that both countries feel relaxed enough now to feel free from any serious commitment to resume it.

However, developments prove this rearrangement of priorities counterproductive and playing in Iranian hands, making the regional Iranian alliances stronger, perpetuating the Syrian crisis, around which a new multi-polar world is emerging, and sidelining the Palestinian peace partners, leaving them with no other option but to take their deadlocked peace process to the United Nations, to bring back on track the Palestinian - Israeli conflict to the top of the international agenda in the Middle East, thus creating a fait accompli that will make impossible the Arab - Israeli - U.S. front against Iran that Washington has been trying to build up over the past few years.

Cornering the Palestinians longer in their United Nations option, similarly changing nothing on the ground to end the Israeli military occupation, would in no time see them loosing faith in peace making to be pushed involuntarily to realign regionally to the other side, which would exacerbate the Iran "threat" rather than containing it.

* Nicola Nasser is a veteran Arab journalist based in Bir Zeit, West Bank of the Israeli-occupied Palestinian territories. He can be contacted at [email protected].