The last trial of the classic pirates under the "Jolly Roger" was held over 100 years ago. But today, nearly every day Somali pirates appear in court. What pushes them for armed robbery, hostage taking and murder of innocent citizens, and how different countries are looking at the problem of piracy? 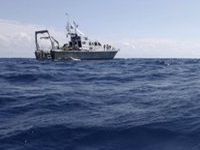 It would seem that piracy is a lucrative but illegal occupation that have long sunk into oblivion, but this is not true - in the modern world, maritime piracy is thriving, and the reason for it is Somali pirates. On Monday, August 13th, Circuit Court of Virginia in the U.S. has sentenced a leader of a pirate group, a citizen of Somalia Mohammed Shibin to 12 life terms, according to The Associated Press. District Judge Robert Dumar said that the pirate was very lucky to avoid the death penalty. In addition, Mohammed Shibin will have to pay $5.4 million to the victims, families of the victims, as well as the United States government.

The pirate is accused on 15 counts that included such acts as "piracy", "hostage taking" and "kidnapping." Incidentally, the defendant's lawyer James Brokoletti said that the verdict will be appealed, as one can be trialed for "piracy" only by the Supreme Court. However, Judge Robert Dumar correctly stated that the Supreme Court may be even tougher than the district one.

Mohhamad Shibin was arrested in April of 2011 - he was the group leader, and therefore, directly involved in attacks on ships and hostage-taking. The villain was planning the actions of his subordinates while in a safe place, and communicated with them on the internet - this is how the U.S. intelligence found him.
The waters around the coast of Somalia Republic of South Africa are dangerous to the merchant and passenger ships. The region is controlled by numerous armed groups whose members call themselves pirates. The ships are seized for ransom. The pirates use small fishing boats and motor boats for attacks, as well as decent weaponry.

Most often, the pirates are people of 20-40 years old, mostly natives of Puntland - a self-proclaimed country in northern Somalia. In fact, the country of Somalia has not been in existence since 1991 - it is divided into regions ruled by the local administration. Due to very low levels of the economy in Somalia, piracy is a major source of income of its residents, and the local government does not oppose the fact of armed assaults on other people's vessels. Geographically, Somalia is very well situated. Most of the sea routes through the Suez Canal pass by the country, and the routes of trade and passenger liners, connecting Africa, Europe and Asia, run nearby.

International Maritime Bureau says that piracy in the region began to develop actively in 2004. However, prior to 2008 the problem was not as acute. Criminal gangs tried not to harm the health of the hostages and the captured crew members of ships, because they knew that they would not be eagerly pursued as long as they do not take anyone's life.
In 2011, the attacks have toughened. On February 22, pirates murdered American hostages from a seized yacht. A representative of the Somali pirates, who requested anonymity, said that it was revenge for ten of their countrymen killed by Russian Special Forces in 2010. Incidentally, the seizure of the yacht allowed the U.S. security agencies to track Mohammed Shibin when he tried to determine what the relatives of the captured U.S. citizens would be able to pay.

In short, the problem of armed attacks in this region is very serious - otherwise, many countries would not take such drastic action against pirates. Back in 2008 the UN adopted a resolution that asked the states to use military force against pirates. The resolution particularly noted that all governments are allowed to use anti-piracy naval and air forces.

In the same year operation "Atalanta" began in support of the UN resolution. The program is designed to protect vessels delivering food to citizens of Somalia, transport, or passenger ships passing through neutral waters, prevention of acts of armed assaults on peaceful ships, as well as control of fishing in coastal waters of Somalia.
Today, the operation involves 23 European Union countries and five other states - Serbia, Montenegro, Croatia, Norway and Ukraine. The control center and operational headquarters are based in British Northwood. The EU annually allocates 8 million euros for the fight against piracy.

However, not all countries are eager to fight against piracy in Somalia. In 2010 the military seized a group of sea pirates who attacked a German ship, and then handed them over to neighboring Kenya for trial: after all, the government of Somalia for a long time could not control the situation in the country. Kenya also has refused to trial pirates, pleading that in the eyes of the local law they were clean. Moreover, the Government of Kenya said that pirates were to be recognized as refugees and provided with assistance.

Despite these efforts, we cannot say that the activity of Somali pirates is reduced as increasingly more gangs go on the hunt for peaceful ships. Yet, the number of successful attacks has been reduced because of the contribution of many countries in an effective fight against them. Incidentally, developed countries are expanding their own authority to protect ships from attacks.

This year, Germany passed a law that allows its Air Forces to destroy the pirates not only at sea but on land as well. According to DW-WORLD, German troops are now able to attack them not only in Somalia but also at shore. In addition, the German Air Force received permission to attack the pirate bases located within two kilometers of the coast.
Some countries, however, believe that intense fighting alone will not solve the problem. In February of this year a conference on Somalia was hosted in London. The head of the Foreign Affairs Committee of the Federation Council, Russian president's special representative for cooperation with African countries Margelov said that destroying the pirates at sea does not make much sense. He said it was necessary to eradicate the causes of sea robbery, restore the country's economy and raise living standards in Somalia. Then piracy will disappear on its own.