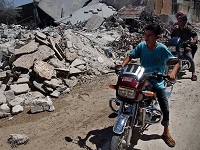 The entire world is watching Syria. Daily reports announce the number of dead and captured (or freed) places. The rebels were joined by the Turkish army that took advantage of the "success" of Syrian Kurds. The most critical situation is now in Aleppo, and there are unrests in Damascus. After Kofi Annan left the UN, few believe that his plan of settlement will be implemented.

The convoy of Turkish troops backed by helicopters entered Dzharablus, a Syrian city populated by Kurds, as reported by Iranian television station "Press TV". The report did not state why the Turkish troops entered the territory of Syria.

The Kurdish problem between Syria and Turkey has emerged recently - this is just one of the episodes of exacerbation of the relations between Ankara, condemning the Assad regime, and Damascus. Earlier, the Syrian Kurds reported that they took control of four towns in the north. Turkey, that for decades was leading the fight in its territory with the Kurdish separatists, responded quickly and harshly, saying that if necessary, they were ready to resort to any measures to prevent similar incidents on its territory. In support of its statements, the Turkish army has repeatedly conducted exercises near the border with Syria.

At the same time, the Syrian army continued a military operation against the forces of the opposition in the second-largest city, Aleppo. The military are shelling the city's neighborhoods Sukkar, Mashhad and Ansari. According to experts, this is the second phase of the operations after the government troops captured the Salah al-Din square and the street that leads to the highway to Damascus.

The Syrian troops control all strategic points in the southerly direction to the city center. The release of Salah al-Din opened access to the adjacent neighborhoods, also entrenched by the insurgents. However, the road to the airport was intersected. The rebels deny that they have lost control of the Salah al-Din. According to the field commander of the "Nur al-Haq," the rescue squad of 700 militants has arrived and managed to win several streets.

In Aleppo, Syria's economic capital, according to various sources, the government troops were confronted by eight to ten thousand armed mercenaries joined by the military from Saudi Arabia and Turkey. The signal for the assault of Aleppo was a statement of Bashar al-Assad about the government's intention to completely clear Syria of terrorists.

Residents of Aleppo are hastily leaving the city for fear of becoming victims of fierce fighting; its parts are in ruins. The situation is close to a humanitarian catastrophe: there is an acute lack of food, hospitals cannot cope with the huge influx of wounded. The UN Observer Mission followed the civilians and left Aleppo for their own safety. "So far we are talking about a temporary transfer due to deterioration of the security conditions," said its representative Josephine Guerero.

Observers moved to Damascus, but the city is also restless. A few days there was an explosion in the building of the state television station. The attack on the position of the SSA is happening in other provinces. According to Al Watan, the armed gang is forced out of the industrial city of Homs. This city should be declared free of terrorists, which would allow the authorities to begin reconstruction of the destroyed neighborhoods. According to witnesses, residents of Homs began a gradual return to the city occupied by Islamic extremists for 18 months.

Combat operations are ongoing in the province of Deir ez-Zor, where oil and gas fields of Syria are concentrated, and in the border areas with Lebanon. There is information about the armed clashes in the resort of Zabadani. Militants are trying to intercept the highway coming from the port of Latakia to Aleppo. According to Arab media, on August 8, 162 people were killed in Syria, most of them - 94 people - were civilians.
The world is waiting for a consultative meeting in Tehran dedicated to finding a political solution to the situation in Syria according to Kofi Annan's plan. Iran intends to gather a round table of experts from 12 countries. Iranian President Mahmoud Ahmadinejad said that he saw the way out of the crisis in a dialogue between the Syrians based on respect for each other. The Iranians demonstrated a sincere desire to mediate and encourage Ankara for joint cooperation.

Iranian Foreign Minister Ali Akbar Salehi suggested taking three steps: to ensure a prompt cease-fire; send humanitarian aid to the Syrians; and pave the way for a dialogue as this is the only way to resolve the crisis. Salehi called the thought that the departure of Assad will bring agreement into Syria an illusion: a calm transfer of power will not happen. "The Syrian society is a collection of ethnic groups, cultures and religions, and if Bashar Assad suddenly loses power, there will be no piece," warned the minister.

A similar view was expressed by Jordan's King Abdullah II, who said that the split of Syria will bring serious problems to the Middle East, the solution of which will take a few dozen years. He believes that the failure to settle the political crisis in Syria would be disastrous. "For all of us this will be the worst case scenario, because Syria will be mired in civil wars," he said.

Meanwhile, the head of Syria Bashar al-Assad continued to lose adherents, fearing reprisals from the insurgents if they seize power. If earlier generals fled from him, now Prime Minister Adel Safar has fled to Jordan. This event was a painful hit for the Assad regime.

Lebanon historically had strong relationships with Syria, and it is affected by the current opposition of the government and the opposition forces more than other countries. "The crisis in Syria has been ongoing for the last 18 months, and the government still continues to hold power. What does this mean? First of all, that the government has much of the nation," said the former Lebanese President Emile Lahoud. "If the Syrian people wanted another president, they would have had him long time ago." Indeed, the opposition is assisted with the modern military equipment and weapons, and the Western and some Arab media are on their side, but for now all is in vain. What could be the cause but the fact that many Syrians are still on the side of the president?

But the so-called opposition does not need strong Syria. Assad has increased the number of seats in the Parliament for his opponents, invited their representatives in the government, but almost none of them accepted the offer. Their goal is to overthrow Assad and not the welfare of their country.

Keep in mind that Kofi Annan's departure from his post as the UN special envoy has substantially reduced the chances of peaceful settlement of the conflict in Syria. The Annan Plan, according to experts, has now completely failed. Analysts do not doubt that the Assad regime is doomed. But before that, lots of blood will be shed, and as a result the extremists will come to power.

The end of the Syrian crisis can probably be expected this fall, and Bashar Assad will almost certainly collapse. Even after the fact the international community will debate endlessly on Syrian issues, exchanging mutual accusations. But there will be no consensus.