Al-Aqsa is the Muslims' red line in the world

The Al-Aqsa mosque is the red line of the world's Muslims, the secretary general of the Royal Committee for Jerusalem Affairs East (Al-Quds) in Jordan, Abdullah Kanaansaid, said on Tuesday.

"The committee is following with great attention, the statements and actions of the Israeli regime, whose main objective is the Al-Aqsa Mosque in East Jerusalem, and where there are sacred places for Muslims and Christians," Kanaan noted.

He has also demanded that the Israelis obey international law, condemning the destruction of sacred monuments of other religions, as well as the occupation of their land.

On Tuesday, dozens of Zionist extremists with the support of the Tel Aviv police and the regime, entered the mosque once again desecrating a Muslim holy place.

Continuing excavation works undertaken by the Zionists under Haram al-Sharif, the sacred area of ​​the Islamic religion containing the Al-Aqsa and the Dome of the Rock in Palestine, are in a real and immediate danger, as this scheme is closing its eyes to the protests by Muslims.

The general secretary of the Royal Committee of Al-Quds Affairs in Jordan denounced the repeated violations on Islamic holy sites by Israeli military and settlers, clarifying that Muslims are observing these facts and they will not happen without causing a reaction.

The Jordanian official has also called on the international community and the Arab League (AL) to fulfill their commitments to the mosque and religious sites of great value to all Muslims around the world.

The Israeli regime, known by western countries as an independent authority, has occupied the territories of the Palestinian people, killing innocent people and destroying the Muslim holy places after its independence given by the west in 1948.

Zionism believes that the chosen people (they themselves) are self-sufficient, and according to that reason they should not meet the demands of millions of people and organizations opposed to their policies.

The Temple of Solomon, the reason that the movement dug under the sacred area was before the rise of Islam in 960 BC a place of cult worship and offerings to God, a fact that motivates them to destroy the existing monuments to rebuild that epoch and in this way to remember this transcendental time in its history. 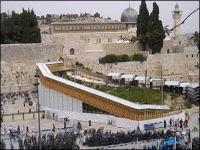