Al-Assad interviewed on Iranian state television - Syrian President Bashar al-Assad stressed that international, regional and internal factors influence the crisis in this country. During an exclusive interview with the Iranian Channel IRIB 4, Al-Asad explained that the international factor is related to the position of western states that have a colonial nature and try to impose their will and their views on other States.

According to the Syrian President, it is possible to see traces of colonialism in their approach, also in regard to the nuclear energy program of Iran, since in this case westerners oppose the Persian country's access to nuclear knowledge.

Referring to the regional factor, he said that "to some countries in the area the position of Syria bothers them," which covers issues such as Palestine and the Iraqi resistance, among others. "These countries want to reduce the important presence of Syria in the area," he underlined.

As for the internal factor, said that there are some challenges in the country, but they also exist in the internal affairs of other countries, and unfortunately, some unconscious people are provoking unrest and chaos in the Syrian territories to make money.

By adding that the majority of those who murder the Syrian people are extremists, Al-Assad stressed that in any crisis he has always emphasized national issues. "Foreign intervention is not possible without internal elements in the territory," he pointed out.

Referring to the socio-economic reforms made in the Arab country, he stated that "having begun the reforms, we focus on economic development and we also implant and perform other measures such as reform in the mass media, and gradual reforms in the political process of the country."

Bashar al-Assad has shown that reforms have no effect on the terrorists or the governments that support them, "because they only seek chaos."

Later, the Syrian president described the six point ceasefire plan presented by Kofi Annan, the special envoy of the United Nations Organization (UNO) and the Arab League (AL) to Syria as "good."

"It's a good plan and we agreed with the plan out of conviction. Specifically, the point of cessation of violence that of course, for us, we mean the cessation of the criminal operations of terrorist groups and the paralyzation of sending money and weapons (for terrorists) from countries that support them," said Al-Assad.

The President denounced the countries that allege to be supporters of the Annan initiative, but use it in a falsified, erroneous manner, and for their own interests, and said that those countries believe that its failure will benefit their interests, because this way they will be able to accuse Syria of having caused the failure of the peace plan.

Elsewhere in the interview, the president of the Arab country denounced the "political hypocrisy" of the west. "(...) the west talks about human rights and (despite this) sends weapons to Israel to kill Palestinians. This hypocrisy of the west has not changed nor will it change and this fact is only one example," he pointed out.

As for his country's relations with Turkey, Al-Assad indicated that the current approach of the Turkish nation to Damascus is the real position of some government officials in Ankara, although not all of them.

However, he assured that the Turkish people take a positive position regarding the events in Syria. "Despite Turkish internal attempts at disinformation, the people of this country know most of the realities."

Faced with a question on whether Turkey is trying to restore the Ottoman Empire, Al-Assad added that this fact is impossible, since this is another era with new concepts. However, he argued that international organizations are the new empires to substitute the ancient ones.

Similarly, he said that those new "empires" should work from objective and rational positions to guarantee the interests of the area and not in the context of the benefits of the west and particularly the United States.

"In our relations with Turkey, we were imagining that it was possible to create an sphere of good relations, as well as alliances and organisms that could join the interests of all, like the Shanghái Cooperation Organization and, supposedly, the Organization of Islamic Cooperation, but there are those who do not allow these organisms find their roles," he asserted. 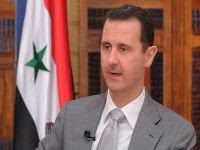