South Americans against imperialism and for Lugo

Imperialism wants to weaken revolutions in South America - "U.S. imperialism and the bourgeoisie want to weaken the revolutionary project in Latin America, with the rccent attack against Paraguayan President, Fernando Lugo," Elias Jaua, the executive vice president of Venezuela, announced on Friday (22nd).  .

"U.S. imperialism and the bourgeoisie want to weaken the revolutionary project in Latin America, with the recent attack against Paraguayan President, Fernando Lugo," Elias Jaua, the executive vice president of Venezuela, announced on Friday (22nd).  .

During his speech in an act of intervention to deliver resources in the state of Miranda, Jaua said that the peoples and progressive governments in the region should defeat any onslaught of imperialism, as was done in Venezuela in April 2002, in Bolivia, when they tried to overthrow Evo Morales, and Ecuador, where the intention was to depose Rafael Correa.

"It is the struggle of the peoples and governments of South America so that this continent will be respected. What U.S. imperialism knows is that our Latin America is no longer their backyard, that there are people and governments here willing to defend the sovereignty and independence of all countries of Latin America and the Caribbean," he expressed through Venezolana de Televisión.

"Therefore the Venezuelans were able to reach the top, then Peru, then Bolivia, to build the liberty of the whole South American continent. This is our heritage, this is our history, this is our legacy," he said. 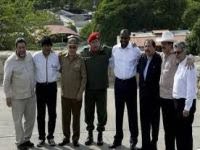