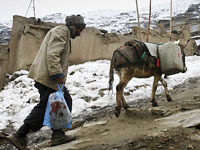 The geostrategic environment of Afghanistan and the South-Central Asian Region (SCAR) will undergo a massive paradigm shift come mid-2013. The US/NATO/ISAF Combine's juggernaut would have come to a grinding halt and the forces would by then have ostensibly receded into the background pending their final egress from the war torn country/region.

But what would the US/NATO/ISAF Combine have to show for all its troubles in Afghanistan? What would it leave in its wake - apart from a geopolitical and geostrategic mess of gargantuan proportions! Quite like Iraq, the US/NATO/ISAF Combine will leave behind a country destroyed and devastated beyond redemption, a nation ripped and torn apart, traumatized and brutalized beyond healing and reconciliation, a region destabilized and polarized beyond extremes!  And US' own reputation as a sensible, responsible and assertive Imperial Super Power - in tatters and beyond repair!

What pathetic, pitiful and pitiable returns for a labor of such arrogantly savage proportions!!

The Geopolitical Dimension: The remnants of the US/NATO/ISAF Combine will have little impact at the regional level. The withdrawal of the main occupation forces will however leave a gaping power vacuum in Afghanistan which regional forces will try to fill.

The Regional Scenario:  Powers like Russia, China, Iran, and Pakistan will mount direct/indirect challenges to the remnants of the US/NATO/ISAF Combine for influence there. None of Afghanistan's neighbors is likely to intervene physically in that country however they will definitely want an Afghan   regime sympathetic to their own national interests. Thus this power struggle could emanate from beyond the borders of Afghanistan portending serious implications within. Pakistan and to some extent Iran have genuine interests in Afghanistan therefore their national interests will have to be secured in any/all dispensations for Afghanistan. Russia and China are getting more proactive there and the Central Asian Republics (CARs) are likely to follow their lead. A peripheral India, still lacking genuine credentials to project power, is most likely to sit on the fence and would be better off by just staying there.

The Shanghai Cooperation (SCO) Factor: This emerging geopolitical and geostrategic environment is ripe for the SCO to exploit. The SCO (with Afghanistan, Pakistan, and Iran as full members) must start exerting itself at the regional (read SCAR) level to the exclusion of all external powers and influences. It is absolutely imperative for the SCO to dominate, take charge and assume responsibility for SCAR - a region it must start relating to immediately! It must evolve, grow and emerge as a unified competing pole and countervailing force to the US-led West in the region. The SCO must be more proactively involved in the affairs of the SCAR and surroundings.

This will help secure the enormous mineral resources of the region for its people as well as giving it decisive control over the many East-West and North-South trade corridors (eg New Silk Road Project) and oil-gas pipelines (TAPI, IP) under consideration. The SCO must unambiguously declare and demonstrate that SCAR lies well within its sphere of influence and that it will henceforth contest any interference in this vital region! With the US already egressing from Afghanistan and "rebalancing" or "shifting pivot" to the Asia Pacific now perhaps would be the ideal time for the SCO to make its bid for the SCAR!

The Afghanistan-Afghan Nation Scenario: The US/NATO/ISAF Combine will probably hand over power to a Northern Alliance (NA) led Central Government in Kabul albeit with a very limited writ. It will be a blatantly unnatural political dispensation - a minority ruling over the majority (Pashtuns)!! Whither democracy?? An inevitable internecine power struggle will thus ensue at the domestic level.  Afghanistan and the Afghan nation would thus be fractured along many lines. The country is likely to be politically divided up between the NA in the North and West and the Pashtuns dominating the South and the East. And both sides and their allies will get involved in a debilitating and long power struggle attempting to widen their areas of influence and writ at the cost of the other.

Existing and emerging tribal, sectarian and ethnic divisions/affiliations will further complicate the scenario. External influences of Afghanistan's neighbors, the presence of militant groups like the Al Qaeda, Afghan Taliban, Tehrik-e-Taliban Pakistan (TTP) etc and interference by the remnants of the US/NATO/ISAF Combine will further polarize the Afghans. Thus a bewildering array of some mutually exclusive and some reinforcing fractures will emerge along which the Afghan body politic and the Afghan nation will be split up.

Numerous warlords and militant groups with their respective fiefdoms will emerge. There will be widespread chaos and a total loss of central command and control from Kabul. This phenomenon will have an extremely destabilizing and polarizing effect in the country, will lead to a civil war, could cause the balkanization of Afghanistan and could also encourage ethnic unifications across Afghanistan's political borders with her neighbors - Pakistan (Pashtuns), Tajikistan (Tajiks), Turkmenistan (Turks/Turkmen), Iran (Shiites) et al. The destabilized country could splinter and send the region into a frenzied tailspin, a deathly vortex!!

The Strategic Dimension:  As the US/NATO/ISAF Combine exits from Afghanistan there would be a number of military/militant forces, inimical to one another, present in the country and the region.

The ANSF:  almost totally comprise of non-Pashtuns! The biggest dichotomy would be that the leadership in the ANSF would almost entirely rest with the NA sympathizers which could lead to a serious implosion once the stabilizing command and control factor of the US/NATO/ISAF is removed. The multi-ethnic nature of the ANSF will cause powerful centrifugal forces based on ethnic, sectarian, tribal and area leanings to seriously threaten the unity of the force. Whatever few Pashtuns that they may have recruited may either desert or turn out to be Taliban/Pashtun sympathizers. The issues of long term sustenance and maintenance of the force (US $ 4.1 billion per annum!) will be a serious concern too. This could well mean the difference between maintaining professional Afghan security forces or finding hundreds and thousands of quasi-trained, well-armed deserters/militants roaming the Afghan landscape seeking affiliations and trouble!

The Bases Factor: The ANSF will have the support of the remnants of the US/NATO/ISAF from five bases spread all around the country - Bagram, Jalalabad, Kandahar, Mazar-e Sharif and Shindand. So their immediate support will be limited to the number of US and Allied troops available at a particular base in the region! The order of battle of the US/NATO/ISAF remnants is likely to comprise drones, gunships, airpower, special operations forces, civilian contractors like Blackwater, Xe, etc and the intelligence agencies. Put together they will be a handful and will keep the pot boiling for long.  However the basic issue of supply routes, maintenance and sustenance of these bases will still remain to be crucial.

The Militant Factor: These Afghan and US/NATO/ISAF forces are likely to be opposed by the remnants of Al Qaeda (AQ), the Haqqani Network (HN), some elements of the TTP and most importantly by the majority Afghan population, the Pashtuns. The US bases are likely to be isolated and then reduced piecemeal by the Afghans who are historically known to employ the tactics of siege, intrigue, conspiracy, treachery, raids, ambushes, IEDs and outright attacks to defeat their enemies. Their patience and ingenuity in such affairs is legendary. These bases are going to stick out like isolated sore thumbs on the Afghan landscape and will be under constant siege/attack!

The Pakistan Factor:  In the US-Pakistan context relations have probably hit rock bottom. US arrogance and intransigence have transformed this once major non-NATO ally into a virtual enemy! How has this rapid transformation come about? It was always on the cards for two major reasons. One, the US has never been a reliable ally to Pakistan (flashback 1965, 1971, 1989) or to anyone anywhere in the world except Israel and itself. Two, there was never any convergence of strategic aims and objectives in the Afghan campaign between the two therefore there could not have been any compatible convergences at the tactical level either. So, despite the political rhetoric by both sides the US' Afghan campaign was actually doomed from the outset. And that is how it will end.

Pakistan is likely to suffer further on two major accounts. Firstly, it will be ironically and unfairly made the scapegoat for US' ignominious failure and defeat in Afghanistan. Secondly, Pakistan could suffer US cross border operations during the period leading upto US' final withdrawal in 2014, still two and a half years away! More "Abbotabads" may be in the offing to get militant leaders like Al Zawahiri and Mullah Omar. The US (other NATO/ISAF countries may balk at this idea) could also carry out arrogant cross border operations (a final kick) in North Waziristan Agency (NWA) or even Balochistan or even at some nuclear sites, just prior to its final departure. Its strategic implications and Pakistan's responses are thus far unpredictable! They could take any form, shape, scope and/or dimension!!

Come end 2014, the US would be defeated, piqued, hurt, angry, bitter and perhaps on the prowl, too!

Pakistan, the SCAR and the world, beware!!