US guilty of arming terrorists 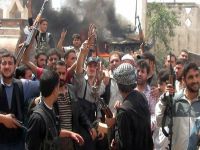 The U.S. newspaper, The Washington Post, has revealed that the White House is the main coordinator of the supply of arms and ammunition to terrorist groups seeking to overthrow the Syrian government of Bashar al-Asad.

"Gulf states pay the costs of the arms supplied to the opposition in Syria in coordination with Washington," according to the newspaper.

The newspaper quoted several opponents, saying it opened its own channel of supply of arms to the terrorists, with support from wealthy Gulf states like Saudi Arabia and Qatar.

Officials at the U.S. State Department have acknowledged that Washington is in contact with the Syrian opposition and "activists" with the aim of promoting information exchange with the Gulf countries that support the opposition in the Arab country.

"We are increasing our non-lethal aid to the Syrian opposition, and continuing efforts with friends and allies in the region and beyond, to have the greatest impact on what we do collectively," according to daily information provided by a senior State Department official, who asked to remain anonymous.

Since the beginning of the protests in Syria, the Damascus government said the unrest and insecurity generated in the Arab country are supported from the outside.