Weapons being smuggled to terrorists in Syria

UN confirms smuggling of weapons to the "rebels" in Syria 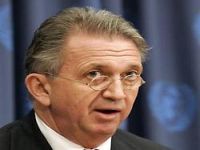 by Terje Roed Larsen, UN envoy for the Middle East

The UN has information that weapons are being smuggled in both directions between Lebanon and Syria, said a UN envoy for the Middle East on Tuesday.

The envoy, Terje Roed-Larsen, said that the Middle East is witnessing a spiral of the "Dance of Death" because of the conflict in Syria while President Bashar Assad faces opponents.

"Based on the information we have, there is reason to believe that there is a flow of arms in both directions, from Lebanon to Syria and from Syria to Lebanon," he told reporters after the Roed-Larsen report to the Security Council on the UN events in Lebanon.

"We have no independent observers for this, but we base our reports on the information we are receiving from a variety of sources," he added.

Roed-Larsen did not elaborate, but on the 28th of April, the Lebanese Navy intercepted three containers of weapons destined for the rebels in Syria on a ship that came from Libya.

Included in what was sent were heavy machine guns, artillery shells, rockets, rocket launchers and other explosives, said a security official.

Syrian diplomats argue that other vessels have been intercepted carrying weapons for the "rebels" in Syrian.

"What we see throughout the region is a dance of death on the brink of war," said Roed-Larsen.